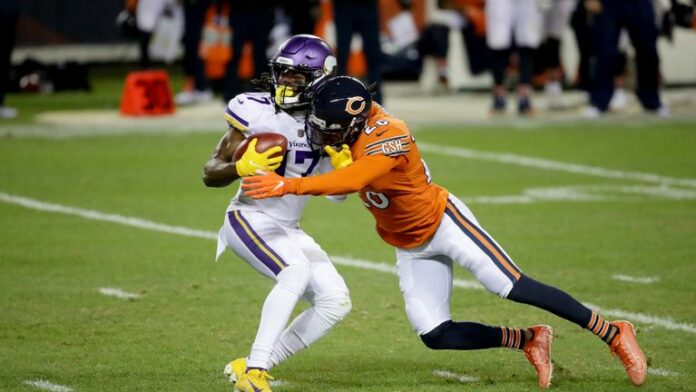 An all-black officiating team will work an NFL game for the first time on Monday night as the Los Angeles Rams face the Tampa Bay Buccaneers.

“This historic Week 11 crew is a testament to the countless and immeasurable contributions of Black officials to the game, their exemplary performance, and to the power of inclusion that is the hallmark of this great game,” NFL executive vice president of football operations Troy Vincent said ahead of the game, which is live on Sky Sports.

The NFL normally assembles its 17 officiating crews prior to the season and works to keep them together in order to promote teamwork and communication.

The crews were organised geographically this year to reduce travel during the coronavirus pandemic.

All of the officials for the Monday night game are regular members of Boger’s team except for Johnson and Steed, who were pulled from other crews.

The Minnesota Vikings overcame the Chicago Bears 19-13 in a cagey Monday night meeting in which Bears quarterback Nick Foles was carted off the field with what looked like a serious injury in the final 37 seconds.

Minnesota quarterback Kirk Cousins, meanwhile, exorcised some demons as he threw for 292 yards and two touchdowns – both to Adam Thielen – to record his first victory on Monday Night Football, at the 10th attempt.

Chicago took the lead as Cordarrelle Patterson started the second half with a 104-yard kick-off return for a touchdown – the team’s only trip to the endzone in the game as the Bears offence struggled again, even after the move from head coach Matt Nagy to hand over play-calling duties to offensive coordinator Bill Lazor.

A couple of Dan Bailey field goals in the third quarter tied the game up at 13-13, before Cousins’ second scoring connection with Thielen with 10 minutes left in the fourth put the Vikings up for good.

The victory is the third-straight for Minnesota (4-5), while Chicago (5-5) suffered their fourth consecutive defeat, with the two NFC North divisional rivals headed in very different directions.

Head coach Andy Reid has signed a contract extension with the Kansas City Chiefs, the club announced on Monday.

Reid, in the midst of his eighth season with the team, has led the Chiefs to an 85-36 regular-season record, six playoff appearances in seven seasons, back-to-back AFC Championship Games and one Super Bowl title.

“Over the last eight seasons here in Kansas City we’ve had the opportunity to witness one of the greatest head coaches of all time lead our franchise to its first Super Bowl title in 50 years,” Chiefs chairman and CEO Clark Hunt said.

“He’s a hall of fame head coach, but more importantly, an outstanding person who has really changed our team culture. I’d like to congratulate Andy and his family on this well-deserved extension. It is our hope that he can finish his legendary career right here in Kansas City.”

Todd Snyder’s Massive Sale Is Destroying Any Semblance of My Self...

The COVID Vaccine Made History. Let’s Channel That Energy Into Curing...