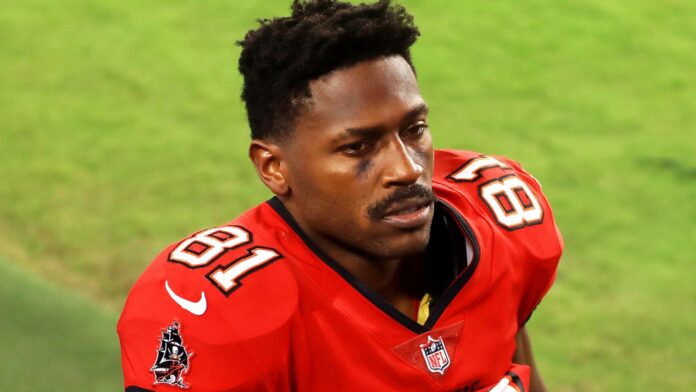 Brown accused of breaking surveillance camera and throwing bicycle at security guards near his home; homeowners’ association decide not to pursue charges against Buccaneers receiver; Brown “wants to be a good neighbour,” says spokeswoman

Antonio Brown is under investigation by the NFL following a report that he broke a surveillance camera and threw a bicycle at a security guard near his Florida home last month.

The Miami Herald, citing a police report, stated there was cause to charge Brown for his actions, but the homeowners’ association chose not to proceed with the case.

In a brief statement, the NFL said: “The league reviews any such incident of this kind.”

Brown is just two games into his spell with the Tampa Bay Buccaneers, who he joined after being given an eight-game suspension for “multiple violations of the NFL’s Personal Conduct Policy”, according to the league.

The Bucs released a statement following The Miami Herald’s report, saying: “We are aware of the reported incident involving Antonio Brown prior to his signing.

“When Antonio joined us, we were clear about what we expected and required of him. Thus far, he has met all the expectations we have in place.”

Speaking to The Miami Herald, the president of the homeowners’ association, Sylvia Berman, rejected reports they did not pursue the case against Brown because they were scared of retribution from the 32-year-old.

She said the association was not “afraid of him” but the case was not big enough to move forward with and Brown had agreed to pay for the camera he broke.

A spokeswoman for Brown, Alana Burstyn, said one of the issues between Brown and the homeowners “involved difficulties that visiting friends and family experienced while attempting to access a visitor gate.”

She added: “That and all other issues have been fully and amicably resolved, and everyone is getting along just fine. I am not sure who is trying to promote this narrative.”

Burstyn went on to say Brown “regrets that he lost his cool that day and he has made amends. However, he is rightly concerned that he is routinely targeted by some people for mistreatment and undue scrutiny because he is Antonio Brown.”

She also said Brown “wants to be a good neighbour, good citizen and a good team-mate.”

Brown – a seven-time Pro Bowler and four-time first-team All-Pro – has 10 receptions for 100 yards in his two games with the Bucs in 2020.