Home Culture A Tom and Jerry movie gets a hopeful plan for release in... 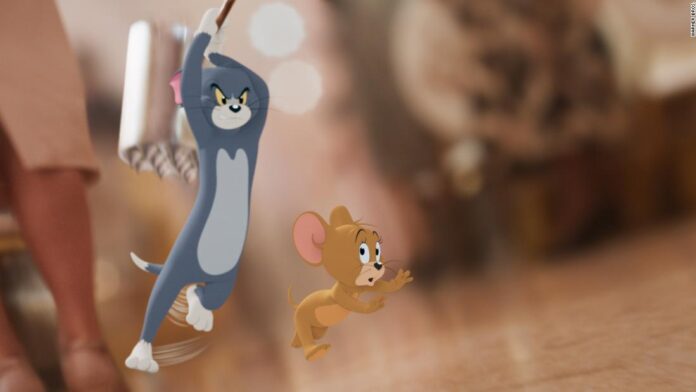 The violently antagonistic cat and mouse will star in “Tom and Jerry,” a hybrid live-action and animated film that sees the two square off in an upscale New York hotel.
Per the trailer, conniving mouse Jerry has taken up residence in the molding, and eager-to-please employee Chloë Grace Moretz is charged with evicting him. Tom arrives to help terrorize the mouse out of this house.
But as anyone who’s seen any iteration of “Tom and Jerry” knows, the cat rarely wins. In the trailer alone, Tom pinballs between two cars, is cartoonishly electrocuted, and is thrown in front of a bus by his tiny tormenter.
Michael Peña, Colin Jost and Ken Jeong co-star with the Hanna-Barbera characters. Cartoon violence ensues.
The film is scheduled for a March theatrical release.
Studios are tentatively scheduling films for wide theatrical releases in 2021 with hopes that coronavirus cases will subside and it’ll be safe to gather in enclosed spaces with strangers again. Blockbusters like the James Bond flick “No Time to Die” and Marvel’s “Eternals” were delayed for months from their initial release date, though many theaters haven’t survived months-long closures brought on by the pandemic.
Some studios are releasing films on streaming platforms, like Disney with its would-be blockbuster “Mulan,” or are screening them in theaters for a few weeks before they debut on demand.