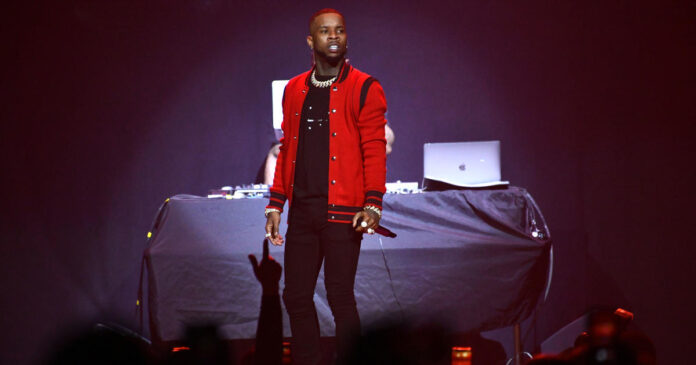 Rapper Tory Lanez on Wednesday pleaded not guilty to charges that he shot Megan Thee Stallion in July. A lawyer representing the 28-year-old entered not guilty pleas for one count of assault with a semiautomatic firearm and one count of carrying a loaded, unregistered firearm in a vehicle, CBS Los Angeles reports.

The incident occurred on July 12 when Lanez, whose real name is Daystar Peterson, and Megan, whose real name is Megan Pete, got into an argument while riding in an SUV in the Hollywood Hills, according to a criminal complaint. As Megan was exiting the vehicle, Lanez allegedly shot at her feet several times, wounding her.

Lanez was arrested at the scene and, at the time, police announced an unnamed victim had been taken to the hospital with a foot injury. Several weeks later, Megan accused Lanez of shooting her in a since-deleted Instagram Live.

“Yes, this n**** Tory shot me,” she said in the video. “You shot me and you got your publicist and your people going to these blogs lying.”

In October, Megan addressed the shooting in an op-ed in the New York Times.

“I was recently the victim of an act of violence by a man, she wrote. “After a party, I was shot twice as I walked away from him. We were not in a relationship. Truthfully, I was shocked that I ended up in that place.”

She also explained why she was initially hesitant to publicly discuss the shooting.

“My initial silence about what happened was out of fear for myself and my friends,” Megan wrote. “Even as a victim, I have been met with skepticism and judgment. The way people have publicly questioned and debated whether I played a role in my own violent assault proves that my fears about discussing what happened were, unfortunately, warranted.”

Lanez was charged on October 8. The next day, the rapper tweeted, “The truth will come to light…I have all faith in God to show that … love to all my fans and people that have stayed true to me & know my heart … A charge is not a conviction. If you have supported me or meg thru this, I genuinely appreciate u.”

Lanez faces a maximum sentence of 22 years and eight months in state prison if convicted on all charges, according to CBS LA. He remains free on $190,000 bail. The next hearing is schedule for January 20, the station added.