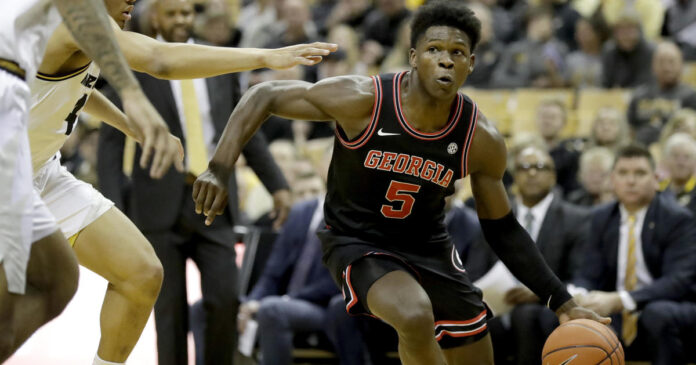 Anthony Edwards paid tribute to his mother and grandmother. Onyeka Okongwu recalled his brother. Obi Toppin thought about coming home. Tears flowed freely for those and many more players Wednesday night when their long-awaited, months-delayed NBA dreams were finally realized.

Edwards was taken by the Minnesota Timberwolves with the No. 1 pick in an NBA draft delayed multiple times because of the coronavirus pandemic.

Commissioner Adam Silver announced the pick from ESPN headquarters in Bristol, Connecticut. The draft was originally scheduled for June 25 before multiple delays caused by the virus pushed it back and out of its usual home at Barclays Center in Brooklyn. Boxes of hats were shipped to the top prospects to put on the one they needed after their name was called.

Edwards watched while seated next to portraits of his late mother and grandmother. They both died of cancer and he was emotional after his name was announced.

“As far as just being excited and just being happy and ready to go and ready to work and ready to get there as soon as possible, those emotions were overwhelming with just my mother and grandmother being there,” Edwards said. “I mean, it was just a dream come true and just a blessing.”

And though there wasn’t the usual family table in the green room and trip on stage to meet the commissioner, some players still were outfitted in fashionable attire – perhaps none more than No. 12 pick Tyrese Haliburton of Sacramento, whose blue, floral suit had the words “Black Lives Matter” on the inside.

They celebrated with family, friends, coaches – and in Cole Anthony’s case, even celebrity fans.

Movie director Spike Lee caused many NBA fans to a double-take when he made a sudden appearance on screen after Cole Anthony was selected 15th overall by the Orlando Magic, notes CBSSports.com’s Gabriel Fernandez. The prolific filmmaker and notable New York Knicks fan was seen jumping for joy on the right side of the screen after Anthony’s named was called.

The connection appears to be with Anthony’s father, Greg Anthony, a Knicks guard in the 1990s, an era where Lee became the most famous Knicks fan in the country. Given the degree of celebration, you could have easily gotten the impression that a direct member of Lee’s family was chosen.

Some moments triggered deeper emotions. Okongwu, taken No. 6 by Atlanta, recalled his older brother, Nnamdi, who died after a skateboarding accident in 2014.

Toppin, the national player of the year last season at Dayton, struggled to speak after New York took him at No. 8, bringing the Brooklyn-born forward to his hometown.

Edwards became the 11th straight one-and-done player to be the No. 1 pick, coming in a year where there was no clear obvious choice. He averaged 19.1 points for the Bulldogs, tops among all freshman.
The newcomers will have precious little time to prepare for their debuts and need to knock off months of rust or more – Wiseman hasn’t played an organized game in a year – without the benefit of summer league. Training camps open in early December and the 72-game 2020-21 season is set to begin on Dec. 22.

‘ER’ cast will reunite for special ‘Stars In The House’ episode

Britney Spears is ‘flattered’ people care so much

What to look forward to in Super Bowl 50

Whistleblower claims WHO tried to force him to change report about...