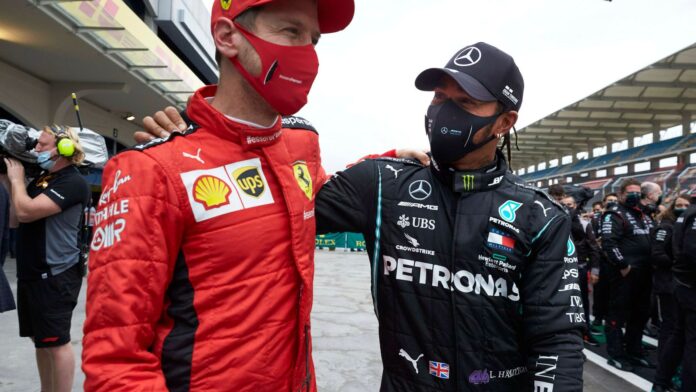 With just three races remaining in Formula 1 2020, there are still plenty of uncertainties about next season’s grid, with plenty of pressure on certain drivers; Below, we chart which of the current drivers are staying put, and who’s moving where…

The Formula 1 future of Formula 1’s most successful driver has still not been confirmed as we head into the final month of his contract – but expect a new deal imminently. Hamilton, who has spoken about wanting to continue making progress on and off the track, and Mercedes’ boss Toto Wolff have been firm in their stance that talks would ramp up once the 2020 titles were sealed, so there should be progress over the final three races. The length of the contract is the only question mark.

Valtteri Bottas: Signed on for 2021

Both Bottas and Hamilton came into 2020 in the final years of their deals and you would have probably got long odds on the Finn being signed up first. But Bottas, who joined Mercedes in 2017 and who is one half of the longest-running partnership in F1, agreed an extension with the team back in August – which sees him stay for “at least” the 2021 season.

F1’s hottest property outside Hamilton signed a new contract back in January, committing himself to Red Bull until the end of 2023. But will Verstappen, 23, stay if his team fail to deliver a championship-contending package? Next season, Honda’s last as Red Bull’s full-time engine supplier, could be huge.

Alex Albon: TBC – but can secure his seat

There is still plenty of doubt about who will partner Verstappen next year heading into 2020’s season-ending triple-header, where it is crucial for Albon to perform. Red Bull have continued to give Albon, who is ninth in the championship, chances but while they want him to earn his seat, there comes a time where Albon actually has to earn it. Particularly with other intriguing driver options on the market…

Perez was confirmed to be leaving Racing Point back in September to make room for a certain four-time F1 champion. It appeared a harsh decision at the time, and since then Perez has been in sparkling form – his deserved Turkey podium lifting him to fourth in the championship. The Mexican, however, has few options to remain on the grid and admits that he’ll either join Red Bull for 2021 – which is far from certain – or take a sabbatical. That would be a waste.

While the details of Stroll’s contract and the length of it are rather private, he was never going to be the fall guy for 2021, when he will stay for a third season with the team. Stroll, the son of Racing Point owner Lawrence, is 41 points behind Perez in the standings but has delivered some impressive drives this season – notably his Turkey pole.

It feels like a lifetime ago now, but Sainz agreed a two-year deal, starting in 2021, with Ferrari back in May. That, of course, was before the delayed 2020 season began and before McLaren proved to have a more competitive package than Ferrari. Sainz, who has been so good since joining McLaren back in 2019, will still see joining F1’s most successful team as a big step up and opportunity.

Norris will be staying with McLaren for a third year in 2021, when he will look to continue to improve on a sparkling start to his F1 career.

Ricciardo’s move for 2021 was confirmed during the driver-market frenzy of May, with the former Red Bull star opting for midfield rivals McLaren at the end of his two-year Renault contract. Renault have been fast in 2020 – with Ricciardo scoring two podiums – but the Australian insists he has no regrets as he prepares to join a McLaren team who will be powered by Mercedes engines next year.

Ocon will enter the second year of his two-year Renault deal in 2021, when he will hope for a more competitive season alongside returning champion Fernando Alonso. The Frenchman, a highly-rated Mercedes protégé, hasn’t given Ricciardo the fight many expected this year.

FERRARI. Charles Leclerc: Signed on until 2024

Leclerc signed a new five-year contract with Ferrari in December of last year, meaning one of the leading lights of F1’s exciting young generation will lead Ferrari into the sport’s new era and beyond.

Vettel was told that he wouldn’t be retained by Ferrari beyond the final year of his contract before they swooped for Sainz, and since then has endured a pretty miserable season. But the four-time champion will have a chance to reinvent himself with a new team – he was confirmed as Perez’s 2021 replacement at Racing Point, soon to be renamed Aston Martin, in September.

ALPHATAURI. Pierre Gasly: Signed on for 2021

The best season of Gasly’s F1 career – which has included an incredible Monza victory – hasn’t been enough for the Frenchman to earn a move back to Red Bull, who didn’t consider him for a 2021 drive. That led to Gasly being confirmed for another year at AlphaTauri in October.

Kvyat’s F1 career has certainly been a roller-coaster and it looks like he’s on the way out of the sport again at the end of this season, with F2 starlet Yuki Tsunoda the big favourite to step in.

Raikkonen will continue with Alfa Romeo for another season in 2021, during which the 2007 world champion and record-breaker in terms of F1 race starts will turn 42.

Antonio Giovinazzi: Signed on for 2021

There were doubts about Giovinazzi’s future, particularly with Mick Schumacher set to join F1, before his Alfa stay was confirmed at the same time as Raikkonen’s in October.

Haas confirmed last month that both their drivers would be leaving at the end of 2020, with Grosjean ready to bow out of F1 after 10 seasons. He has spoken of interest in IndyCar, Formula E and the World Endurance Championship.

Magnussen, still just 28, has been more reticent to concede that his F1 journey is coming to an end – but told Sky F1 in Turkey that “he doesn’t have big sponsorship… so that’s it for me”. Magnussen, like his team-mate, has been linked with IndyCar.

WILLIAMS. George Russell: Signed on for 2021

Russell signed a three-year deal with Williams upon joining the team in 2019, and has starred in his two seasons. That didn’t stop rumours about him leaving at the end of 2020 surfacing following the Dorilton takeover, although Williams have since moved to confirm him for next season. Russell will hope to impress again in 2021 with Mercedes keeping a watching eye.

Nicholas Latifi: Signed on for 2021

Latifi signed a multi-year deal with Williams before his debut season this year.

Fernando Alonso is making his return to F1 after two years away, and will be hoping to conjure up some Renault magic again as he heads back to the team he won his consecutive titles with in 2005 and 2006. He has agreed a two-year deal.

AlphaTauri look likely to bring another youngster into F1 with Yuki Tsunoda hoping to gain enough license points for a drive, while Haas are also set to bring two rookies into the sport. F2 championship leader Mick Schumacher, the son of F1 legend Michael, is almost certainly going to join, and he is set to be partnered by Nikita Mazepin.