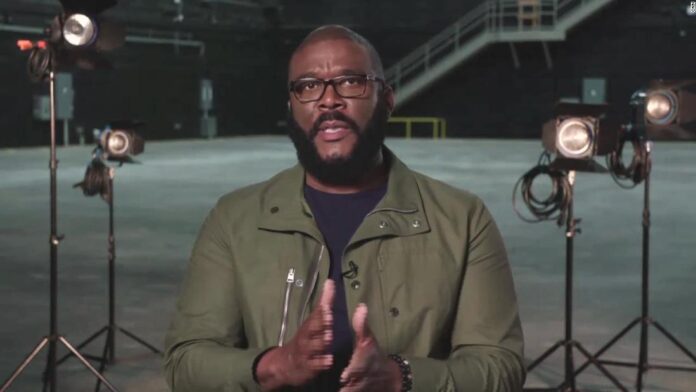 Perry’s Tyler Perry Studios hosted its #TPSGiving food giveaway, where cars are invited to drive-up and receive a meal. This year volunteers dressed in protective gear were prepared to hand out food and gift cards to the first 5,000 cars that arrived.
“Although we wish that we could feed everyone in need, we will close the line at the 5,000th family,” the studio said in an announcement for the event.
Cars lined up for five miles south of downtown Atlanta, according to local media reports, and the food was gone within two hours.
Perry is known for his charitable endeavors.
Over the summer he gifted 1,000 Kroger gift cards to Atlanta families and went door to door with the Atlanta Police Department to hand them out.
He has also paid for seniors’ groceries as well as picked up the tab for people’s Christmas layaways.
Perry’s efforts have also helped keep people employed during the pandemic.
He has continued production of some of his projects at his 330 acre Atlanta based studio, employing hundreds at a time when the pandemic had shut most of the industry down.
Actress KJ Smith, who stars on one of Perry’s television shows, “Sistas,” told CNN over the summer the studio was keeping everyone safe with strict protocols and frequent testing.
“It feels like an incredible blessing that I work for someone who made provisions and made sure that we were safe,” Smith said. “I feel pride in being part of history the second go around, because the first time was him opening the studio.”