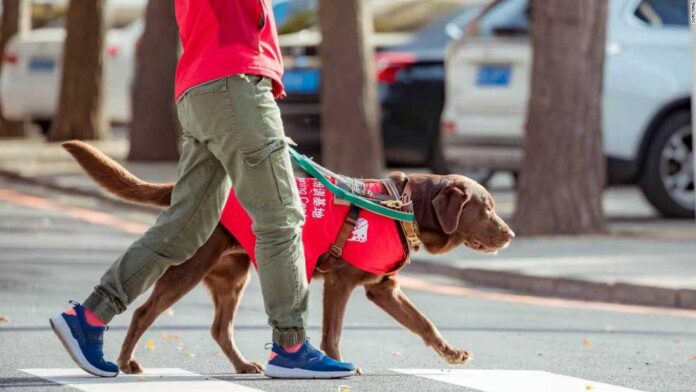 Yang splits his time between living in Beijing with his wife and running a piano studio in his hometown Tangshan, a sprawling industrial city some 100 miles away.
His weekly journey consists of a high-speed train ride, two bus rides and three subway transfers through often-crowded stations. It would have been impossible for most blind Chinese, but Yang is blessed with a furry companion that guides him every step of the way — Dick, a four-year-old Labrador.
Guide dogs like Dick are so rare in China that Yang waited five years to get one. According to state broadcaster CCTV, China only had some 200 dogs in service as of April — which makes them even rarer than the giant pandas.
The service dogs’ scarcity is all the more striking considering the large number of people who could potentially benefit from their help. The China Association of the Blind estimates the country’s visually impaired population to be over 17 million. According to the World Health Organization, eight million Chinese are completely blind — roughly equal to the whole population of Switzerland.
That’s one guide dog for every 85,000 Chinese people who have partially or fully lost their eyesight.
In comparison, about one in 50 blind and visually impaired people in the United States work with guide dogs. In Britain, over 1,000 guide dogs are trained each year for a total of 36,000 people who are registered as blind or partially sighted.

Navigating Chinese cities can be a daunting task for the blind to manage on their own.
A 2016 survey by the China Information Accessibility Product Alliance found that 30% of the country’s visually impaired seldom leave their homes; only one in four regularly go outside by themselves, with the remainder mostly shepherded by family and friends.
Before Dick came along, Yang had to rely on his white cane to get around — but he said it was difficult and dangerous to cross the multi-lane highways and navigate the numerous pedestrian overpasses and tunnels that make up the Chinese capital by himself. “I was in constant fear,” he said. “The most terrifying thing is that I have no idea what the road ahead is like.”
While much progress has been made in recent years, Chinese cities are still far from disabled friendly. Even in Beijing, accessibility is lacking in many places — for instance, not all pedestrian crossings have audible traffic signals for the blind, Yang said.
Even when accessibility facilities are in place, they sometimes fail to serve their purpose. Most Chinese cities, for example, have tactile paving designed to guide the blind lining sidewalks along major streets — as required by a law passed in 2001. But they are often unfriendly or downright dangerous to use. Some are built to zigzag down a street, while others lead straight into trees, lamp posts or fire hydrants. Many are constantly occupied by illegally parked cars, bicycles or street vendors.
“The ‘blind paths’ are basically impossible to walk on,” said Yang, who gave up following them years ago. “They’re not built or maintained with the convenience of blind people in mind.”
CNN’s asked the Ministry of Housing and Urban-Rural Development whether it is overseeing how tactile pavings for blind people are built and maintained, but did not receive a response.
The poor upkeep of roads, in general, often poses another hazard — Yang once fell into an uncovered seven-feet deep manhole while passing through an old residential compound. Luckily he did not suffer serious injuries, and managed to climb out of it.
In China, manhole covers are often stolen to be sold for scrap metal. According to state media, there were more than 70 publicly reported injuries or deaths due to stolen or broken manhole covers between 2017 and 2019. The incidents are so prevalent that China’s Supreme Court announced stricter punishments in April, subjecting those who remove or damage manhole covers in busy areas to the maximum sentence of the death penalty, when it leads to serious injury or deaths.

Yang first learned about guide dogs in 2008 — when a golden retriever led Ping Yali, a partially blind long jumper who won China’s first Paralympic gold medal, into the opening ceremony to relay the torch for the Beijing Paralympic Games.
After three years of researching and making calls, Yang finally found out where to apply for one — a guide dog training center in the northeastern city of Dalian.
Founded in 2006, the Dalian China Guide Dog Training Center was the first of its kind in China — but similar facilities existed internationally for decades. The world’s first guide dog school was established during World War I, in Germany, to help returning soldiers who had been blinded on the front lines. The US got its first guide dog school in 1929, and the UK in 1940, according to the International Guide Dog Federation.
Wang Jingyu, an animal behavior expert at Dalian Medical University, decided to train China’s own guide dogs after noticing that, unlike their Western counterparts, blind Chinese athletes did not have guide dogs to help them during the 2004 Athens Paralympic Games, said Liang Jia, a staff member at the Dalian center.
Without any prior knowledge or experience, Wang researched online how to train guide dogs and sought help from international experts.
When the center opened in 2006, about 50,000 people called from across China to apply for a guide dog — but Wang only had two to offer. “Our office phone was ringing off the hook,” Wang told state-run news agency Xinhua.
The facility has expanded over the years — it now keeps 100 in various stages of training, and more than 20 graduate each year.
The puppies — mostly Golden Retrievers and Labradors, chosen for their gentle, friendly nature — are first sent to foster families for a year to learn to live with humans, before returning to the center for another year of professional training. It is a lengthy and strict process — along the way, about 60% of the dogs will be disqualified and put up for adoption as pet dogs. The causes for disqualification can include showing aggression, having excessive energy, being overly sensitive to pressure, and lacking the ability to remained focus, as well as suffering from car sickness.
After passing all the evaluations, a qualified guide dog will be matched with an owner and undergo another 40 days of joint training, before it can follow the owner to its new home.

Over the past years, a few smaller guide dog training centers have opened in China, but the Dalian center remains the country’s largest, and one of the only two recognized by the International Guide Dog Federation (IGDF). In general, it’s hard to get the funding to start or continue running a center. And to be qualified by IGDF, a center needs to pass a strict evaluation process, which can be difficult for those without sufficient funding.
The other IGDF-approved school, Yunnan Erxin Dog Guides, opened in Shanghai in 2018. Before that, the Shanghai Disabled Persons’ Federation had been commissioning a police dog training center in the nearby city of Nanjing to train guide dogs for its visually impaired citizens.
The lack of funding is a key constraint for China’s guide dog schools, Liang said. As a nonprofit, the Dalian center provides guide dogs to applicants for free, but each animal costs about 200,000 yuan ($30,353) to train. In the early years, Wang used his own savings to keep the center running. Then, in 2010, the Dalian government started to subsidize the center with 60,000 yuan ($9,106) for each guide dog it trains. The center also receives donations from the public, but they’re often not enough to cover the cost — currently, it faces a 30% budget deficit, according to Liang.
“If we had more sufficient funding, we’ll be able to train more guide dogs,” Liang said. “But the reality is, we can only operate on the money we’ve got.”
The center currently has about 30 instructors. Many of them are young university graduates who are passionate about dogs and helping others — and are committed enough to accept a monthly salary 60% below the city’s average income.
Liang, who graduated from university in 2011, gave up her job offer as a civil servant to join the center as an instructor — against the advice of everyone around her. “My parents disapproved it, and my boyfriend broke up with me because of it, but I had my mind set on the job — it is a cause that’s worth devoting my passion and youth for,” she said.
Liang hopes the government — especially the central government in Beijing — can offer more funding, given that its guide dogs are offered to applicants not just from Dalian, but all over China. The center is also trying to raise public awareness about guide dogs on social media, hoping to bring in more donations.

Yang, and other guide dog users, said that guide dogs have become more accepted by the Chinese public in recent years. More often than not, they are allowed on subways, buses and trains, especially in first-tier cities such as Beijing, Shanghai and Shenzhen.
But some other cities still have a long way to go. In April, in an attempt to test public acceptance, a traffic officer in Taiyuan, Shanxi province, pretended to be blind and tried to board a bus with a guide dog. He ended up being waved off the bus by the driver and scolded by some passengers for wasting their time. The video of his encounter went viral on Chinese social media, drawing calls for more public awareness on the difficulties faced by the country’s blind.
While guide dogs have allowed Yang and others to travel more freely, there are also obstacles — many hotels still don’t accept guide dogs, and buying a plane ticket can sometimes turn into a bureaucratic nightmare. Even if a guide dog has valid work permit and proper vaccine certificate, many airlines requires a separate health certificate — the kind needed for the transportation of pets and farm animals, which can be tricky to obtain.
Chinese laws are vague on the use of guide dogs in public. The Law on the Protection of Disabled Persons says “blind persons shall comply with relevant state regulations when entering public places with guide dogs,” but it doesn’t specify what the “relevant state regulations” are.
Some cities have issued their own policies to allow guide dogs in public places and transports, but enforcement can be spotty.
Yang said he had been turned down by bus drivers, hotels and restaurants, but he wasn’t discouraged. Instead, he treated every refusal as an opportunity to let one more person learn about guide dogs.
“There are only some 200 guide dogs in a country of 1.4 billion people — the chance of meeting one is extremely low,” he said. “That’s why we need pioneers to introduce them (to society.)”