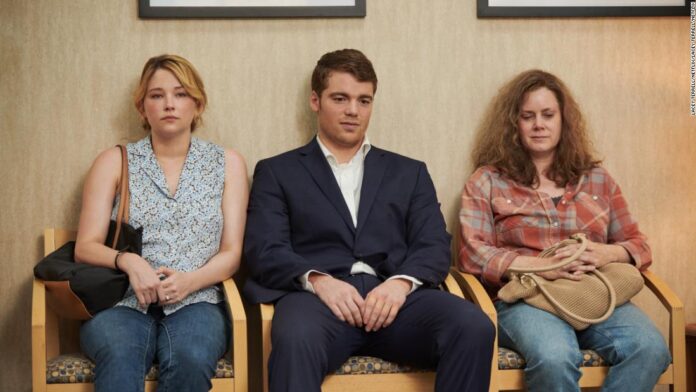 Although Vance is ostensibly the center of this story — played by Gabriel Basso as a Yale Law student, and Owen Asztalos as a teenager — the movie is understandably preoccupied with the key women in his life, his mother Bev (Amy Adams) and foul-mouthed grandmother Mamaw (Glenn Close).
The story picks up with the older J.D. at Yale, interviewing for positions with snooty law firms and feeling conspicuously out of place alongside the blue-blooded, legacy candidates, who know which fork to use. Yet that process is interrupted and complicated by Bev’s latest overdose, forcing him to journey back to Ohio to help his sister (Haley Bennett) deal with mom, who might be the world’s worst patient.
An extensive series of flashbacks follow, revealing J.D.’s early years in Kentucky, the family’s move to Ohio and Bev’s litany of bad choices, from hooking up with the wrong guys to lashing out at her children, occasionally in violent fashion.
At the same time, J.D. is frequently told family takes precedence over everything else, an argument presented most forcefully by Mamaw, who sees the potential in him as well as the need to intervene in order to put him on the right path.
Directed by Ron Howard from a script by Vanessa Taylor (an Oscar nominee for “The Shape of Water”), there’s really no polite way to say that J.D., as depicted, is weakly written and whiny in as a teen, and not much better once he gets to law school. He has a girlfriend (Freida Pinto), but on screen there’s scant chemistry between them, which isn’t helped by him asking her what she sees in him.
J.D. keeps insisting that his mom is a “good person,” but her abusiveness toward her kids and others doesn’t elicit much sympathy — especially when she intentionally endangers her son’s life — despite her own difficult upbringing. These would theoretically be juicy roles for Adams and Close — about as unglamorous as you’ve ever seen them — but even with those stars letting loose, the conversations about broader cultural and economic challenges that the book triggered get obscured by what feels more like a Lifetime movie.
Netflix has a parade of star-studded films lined up through the end of the calendar year designed to vie in the awards race, and on paper — with its marquee director and stars — “Hillbilly Elegy” should fit right in.
The movie, however, turns out to be the opposite of its central character — namely, an underachiever, despite those advantages.
“Hillbilly Elegy” premieres Nov. 24 on Netflix.