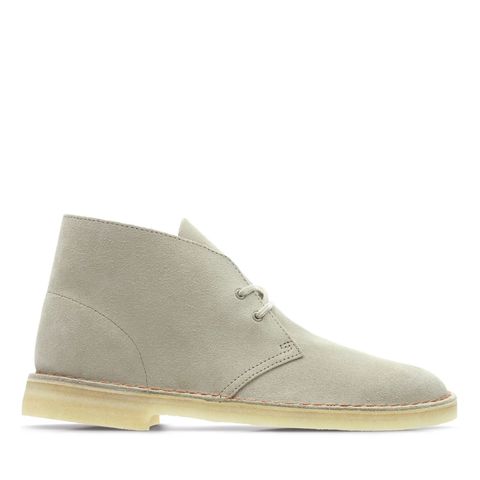 As the great-grandson of James Clark, founder of C & J Clark (better known by its trading name Clarks), Nathan Clark was asked to keep an eye out for useful shoes designs while serving on the staff of the West African Brigade in Burma and India during WWII. The request came from his older brother Bancroft, who’d become chairman of the venerable family shoe company in 1942.

Ever dutiful, Nathan, who had a keen appreciation of the family business, returned with a pair of ideas: the “Chupplee” men’s sandal, based on sandals worn in the north western part of India; and the Desert Boot, a crepe-soled, rough-suede boot made-to-order at the bazaar in Cairo for 8th Army officers during the North African campaign.

“Some of these officers came to Burma, and this is where I saw them,” Clark later recalled, but the boots had their origin in South Africa. Officers in the South African division stationed in the Sahara wore the boots, which is how the 8th army encountered them. Worn by boar farmers and called veldtschoen, they were similar to chukka boots—made of reversed leather, ankle-high, with 2 or 3 eyelets.

“The main difference,” explained John Berendt, former Esquire editor and author of Midnight in the Garden of Good and Evil, “was that the uppers, instead of being turned in under the foot, were turned outward like a flange and sewn directly to the sole.”

These boots were designed for the desert terrain as comfortable and functional alternatives to the clunky, painful—and hot—British government-issue army boots. “Clark had been looking for a comfortable, casual shoe,” said Berendt, “and this close cousin of the chukka—a bit more slipperlike because of the stitching—seemed just the ticket.”

Not so fast. The road to success for Nathan was littered with obstacles. “Although I sent sketches and rough patterns to Bancroft,” said Clark, “no trial samples were made until after I returned.” This was in 1946. “Bill Tuxill was the pattern cutter at the time—a very talented and hard-working man. He was very overloaded with his regular sampling work. Every time I went to see how my two shoes were getting on, I would see the sketches etc. on his back shelf, and he would say with some embarrassment: ‘Yes, Mr. Nathan, I will get on with them next thing.’ In the end I cut the patterns myself.”

But when the trial samples were presented to the Stock Committee, who decided on such matters as which shoes to include in the new lines, the Desert Boot got no love, the consensus being “they would never sell.”

If Nathan was discouraged, he was nevertheless undeterred. If he couldn’t drum up interest in the UK for the boots, he at least had the freedom to explore other options. Put in charge of overseas development, Nathan created Clarks Australia in ’48 and began selling the Desert Boots down under. They also began to appear in the West Indies, where the boots would become massively popular and an integral part of Jamaican music and culture.

And then there was the motherlode of the American market. The appeal of the States, then basking in post-war prosperity, was undeniable and it’s what brought Nathan to the Chicago Shoe Fair in 1949, where he met Esquire’s fashion editor Oskar Schoefler.

Based in Chicago, Esquire was 16 years old at the time, and the reigning authority on men’s popular fashion. What began in the heart of the Depression as an experiment—the first real men’s fashion magazine—had become a recognized brand which far exceeded original expectations. The formula of literary muscle (Ernest Hemingway and F. Scott Fitzgerald appeared in the debut issue) plus fashion proved durable. Still, in the aftermath of WWII, Esquire aimed to stay relevant to a new, younger generation. By the end of the ’50s, it published avant garde writers like Albert Camus and Jack Kerouac, whose beatnik audience made the Desert Boots a regular part of their wardrobe.

So, it’s not hard to imagine what Schoefler saw in the Desert Boots that Nathan showed him at Esquire’s booth at the 1949 Shoe Fair. In an era before sneakers were acceptable as casual shoes, the crepe-sole boots were dressed-down, no-frills footwear that retained not just a British but an international appeal. It was kismet and Schoefler, remembers Clark, “was extremely interested in them as a new and widely applicable type of casual footwear.” 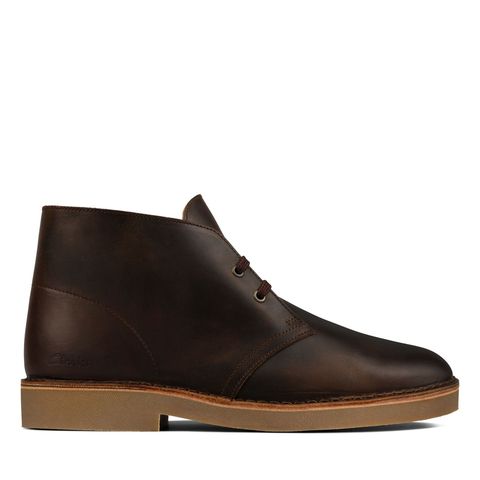 Schoefler published a generous write-up on the Desert Boots in early 1950 in Esquire’s more fashion-forward cousin publication, Apparel Arts. And it’s this piece that Nathan credits with attracting the interest of Bronson Davis, an experienced salesman who ended up representing Clarks in the U.S. and played a major part in the success of the Desert Boot in America. Esquire has continued their admiration of the Desert Boots through the years, in editorials and fashion shoots, as an essential part of contemporary fashion.

Of course, the boots eventually made their way to the UK and the rest of the world, where they became a staple of lo-fi cool for generations. As Berendt put it, “Partisans of Desert Boots swear there isn’t a more comfortable shoe anywhere,” which continues through every iteration that boot has undergone over the last 70 years, including this season’s Desert Boot 2, a modern take on the iconic silhouette that boasts increased volume and enhanced comfort technologies. But even amidst massive shifts in taste and culture, we can safely report: the timelessness of the Desert Boot is same as it ever was.

Vacos Cam review: This promising security camera is handcuffed to a mess of an app

Vacos Cam review: This promising security camera is handcuffed to a...