Home Culture ‘Diego Maradona’s biggest battle was always with himself’ 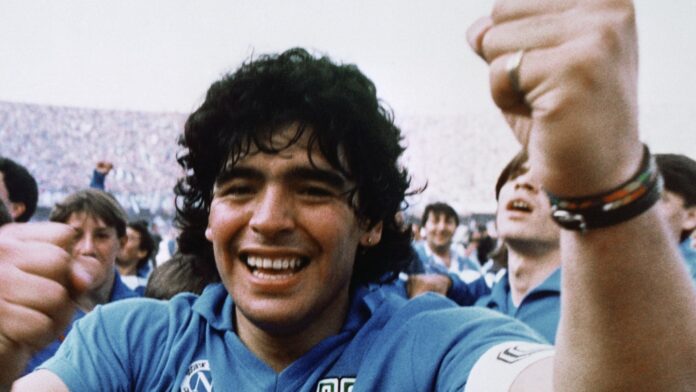 The national team’s former manager had been in a Buenos Aires hospital after surgery to remove a blood clot on the brain earlier this month.

In June 2019, Sky News spoke to filmmaker Asif Kapadia about the two Maradonas – the “sweet, innocent guy and the other guy who’s the ego” – ahead of the release of his documentary about the footballer. Here is his interview.

In July 1984, a then 23-year-old Diego Maradona arrived in Naples, heralded by fans as their saviour after years of misery on the pitch.

Sure enough, the record signing proved to be the Italian club’s turning point, leading them to two Serie A titles in three years.

The charismatic Argentinian was the biggest footballer in the world, a god on the pitch who was adored by thousands of fans. But away from the beautiful game, his life was spiralling out of control.

His time in the city made him a global superstar, but broke him as a man.

The stories of cocaine use and reported mafia friendships have been well documented. But asking the man himself? That proved an extremely tricky task for journalists over the years.

His third feature documentary tells the story of the biggest period in Diego Maradona‘s career, based on more than 500 hours of previously unseen footage from the football star’s personal archive.

The film, titled Diego Maradona, tracks the footballer’s journey, Kapadia tells Sky News, from rags to riches to the almost inevitable fall from grace, exploring Maradona the man and Maradona the footballer, and how the two existed together.

“If there’s real chaos in your life how can you go on to the pitch and play and be brilliant?” he says. “That was the idea.”

“He arrived at a team who the year before had nearly been relegated, never won anything really in their history. Within a few years they’re winning the championship in probably the toughest league there’s ever been at the time.

“He wins the World Cup, becomes the best player in the world, but all of the problems that he’s still dealing with I guess in certain ways later in life, the problems all really started in Naples. And the person who leaves, it looks very different and it’s a very different place to the quite young, vulnerable person that arrives there at the beginning.

“The film… kind of tracks his journey from someone who almost came from like a shantytown or a favela, really, really poor, really, really from the street, who rises to the top and gets treated like a god.

“Really the story is almost about, how can anyone deal with this and somehow come out of it the other end and be sane?”

Kapadia met Maradona several times during the making of the film. Getting him to open up wasn’t easy, he says.

“I knew we were going to have to deal with these subjects… his family issues, his relationships, his issues of addiction, and with his friendships and relationships with people from the underworld.

“This is what happened in Naples, it’s been reported, but if we’re going to do a film we have to talk about it and show it.

“It is tricky, it’s personal stuff. It’s not always something that he was comfortable with but my job is to talk to him and to ask him.

“The first meeting where we really got into an interview, I had my list of questions and I had the really easy ones [first]. I brought up his ex-wife he was with for many years, they have two children. The first thing he said was, ‘I don’t want to talk about her, don’t ever bring her up again’.

“Okay, so I brought up someone else… his first manager. So I brought him up and he says, ‘Don’t mention him. He stole from me’. Oh God, these are my easy questions, I don’t know where I’m going to go now.

“As you meet with the person only then do you understand how this is going to work, how much do they remember, how much are they comfortable talking about. Which questions am I saving up for later? And I did eventually get to the difficult ones but that was probably on my fourth interview.”

Maradona was well versed in how to play the media game, Kapadia says. Drop a bomb about someone or something else and the awkward personal questions might go away.

“If I ask you a question about your family and you give me an answer about Sepp Blatter, it’s not really what I need,” Kapadia says. “Whereas he knows with a lot of journalists he can just drop a bomb and he’ll look at journalists and the journalists will say, that’s a great headline. So even though I came to ask you about A you’ve given me an answer about D, I’ll write a great piece about it.

“That didn’t work for us. So I had to interrupt him and bring him back again and again, and there were a couple of moments when it got a bit awkward but you know, I have to do my job and he understood. He got annoyed but he also said the fact that I had the nerve to ask him these questions to his face, he did say… ‘even though I’m finding it really annoying that you’re asking me these questions, I respect you for asking those questions’.”

Just a few days before the film’s release, Maradona still had not seen it, Kapadia says.

“I tried. This is all part of the fun of working with Diego Maradona. When I met him and interviewed him he was living in Dubai. So I planned to go back to Dubai and show it to him, just him on his TV at home.

“We try to arrange the trip. I’m told he’s not going to be in Dubai anymore, he’s moving to Belarus. Okay. Can I come to Belarus? No, the timing’s not going to be great, he’ll be in Colombia. Okay. I don’t know if I can get to Colombia. Where are you going after that? Well, he’ll be in Moscow for the World Cup. Come to Moscow. I’m thinking, I don’t think Diego Maradona during a World Cup is the right time for me to try and show him this particular film.”

That was a year ago. It still hasn’t happened. But while Maradona may not have seen it, fans will feel very differently. And this isn’t just a story for football fans – it’s a story about a man from humble beginnings, a story about talent and fame and global adoration and admiration, and what that can do to a person.

The story is very much about the two sides to the football star’s personality, says Kapadia. “I think the most interesting thing and really at the heart of the movie is this idea that he’s almost got this schizophrenic kind of personality.

“There are people who I spoke to who know Diego Maradona very well, who say there’s this really sweet guy, a really, really sweet, innocent guy called Diego. And there’s this other guy who’s like the ego, who’s Maradona.

“When people see the film they’ll understand that it’s all in him, it’s all him – one day you meet one person and the next day you meet someone else.

“When you look at his actions in the World Cup last year or you just see whatever he’s doing right now, in the news somewhere he’s up to something, you understand that he’s on this spectrum and there is a really nice guy who maybe I’ll never meet. Maybe that young Diego person who I’ve made a film about who was in Naples, who arrived there, is not the same person as the person I’m interviewing and meeting now.

“So I guess that’s what the film is about. It’s not about an external rivalry in a way Ayrton Senna had Alain Prost, or Amy Winehouse had people around her, relationships and family and husbands and boyfriends and a relationship with the press.

“With Diego Maradona – everyone I spoke to [said this] – the biggest battle is going on within him.”