Home World How Do Octopuses Experience the World? 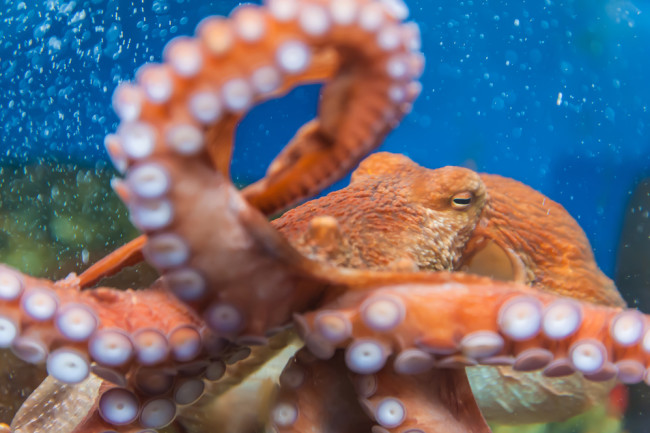 When Dominic Zivitilli began to study invertebrates, it didn’t take him long to pick a favorite. As he peered into the tanks of jellyfish, snails, crabs and their many spineless cousins, one organism seemed to be of a different class. “I got the feeling that one of them was studying me back,” he says.

Over the next few years he learned much about the octopus: that its entire body is involved in cognition, with its arms more or less independent of its brain; that it perceives the world in no small part through its suckers; and in fact its arms contain the majority of its neurons. These days he investigates the perplexing interaction between brain and arms. The exotic anatomy of the octopus, and the incredible implications for its subjective experience, raise questions that upend the standard notions of mind and consciousness.

But what first captivated Zivitilli — now a graduate student at the University of Washington — was the sense that when he looked at an octopus he was, in some profound way, face-to-face with an equal.

His fellow researchers know the feeling well. At first glance, this cephalopod, with its irregular, flowy movements and amorphous form, seems about as far from human as imaginable. Watch one for a moment, though, and beneath the enigmatic appearance, you might recognize something uncannily familiar.

“It seems so unintuitive to us,” Zivitilli says. “But then shines through their curiosity, their interest in activity, their memory, their personality, their moodiness.”

Such descriptions flirt with anthropomorphism — attributing human characteristics to animals — but they sound apt to anyone who has spent time around the most cunning creature without a skeleton. An octopus can unscrew lids and hide inside coconut shells. It can change skin color and texture to blend in or impersonate other species (or, sometimes, seemingly just because they feel like it). The animals can remember individual humans and act hostile toward those they dislike.

With a wide repertoire of elaborate stunts they’ve been known to pull, they’ve also earned a reputation for mischief. Some have flooded laboratories by disassembling valves and shorted electrical systems by shooting liquid missiles at light bulbs. Others have derailed experiments by simply refusing to participate, and instead spraying incessant jets of water at their whitecoat captors. They regularly escape their enclosures.

These striking stories and observations offer a window into the world of the most bizarre form of “intelligent” life on the planet. They tell us how the octopus behaves. But they only go so far toward answering the truly tantalizing questions.

In a word, what is it like to be an octopus? 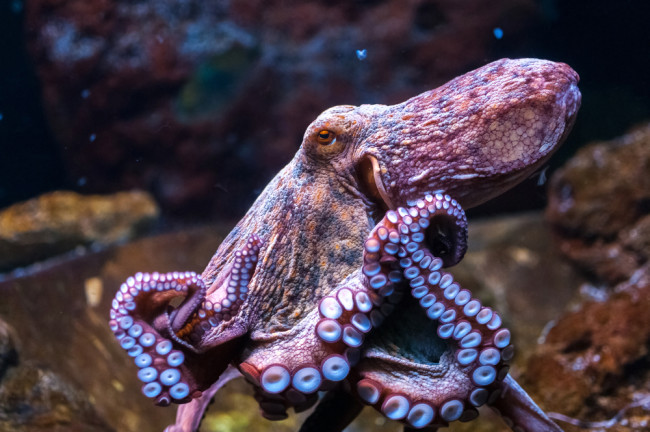 That is, verbatim, the form in which the inquiry is typically posed. Knowingly or not, it’s a nod to Thomas Nagel’s 1974 paper “What Is It Like to Be a Bat?”, an influential philosophical work. Nagel argued that any being as different as a human is from a bat — or an octopus — must fail to grasp the other’s subjective experience.

The Arms Have It

Peter Godfrey-Smith, an Australian philosopher at the University of Sydney who has studied animal consciousness, thinks this is an overstatement. For example, he can imagine what it might be like to have an octopus’s photoreceptive skin and chromatophores, tiny sacs of color the octopus uses to change its appearance. But he agrees that imagination fails when it comes to what is likely a wildly different sense of self, arising from the octopus’s unusual nervous system.

It consists of about 500 million neurons — comparable to a dog — but the majority lie outside the brain, with two-thirds distributed throughout the arms. As Godfrey-Smith describes it in his book Other Minds: The Octopus, the Sea, and the Deep Origins of Consciousness, they are “suffused with nervousness.” That’s why each arm, even when severed from the body, can still act deliberately. There’s no break in the circuit of consciousness.

This utter dissimilarity may be our greatest barrier to empathizing with the octopus. After all, the structure of human subjective experience has its foundation in the centralized arrangement of neurons and their top-down command of the body. “Trying to imagine our way outside of that is much harder,” Godfrey-Smith says. The distinction between mind and body is a cornerstone of Western thought, and the octopus confounds that dichotomy.

To make sense of this, Zivitilli looks to the human-technology interface. Our phones, our computers, our cars are all, in a way, extensions of ourselves by which we process and navigate our environments. But they do so without micromanagement from us, and we are unaware of their complex operations. The arms of an octopus may hold a similar position in relation to its brain.

“It’s not so much like our arms and hands,” Zivitilli says. “It’s kind of like having a semi-autonomous, quasi-intelligent companion.”

Sidney Carls-Diamante, a philosopher at the University of Konstanz, approaches the problem in a different way. “For me,” she says, “the burning question is: how many octopuses are there within an octopus? Does the octopus feel itself as one single entity, or does it feel multiple entities within itself?” (She’s careful not to ascribe too much sophistication to a single arm, saying it “wouldn’t generate a very complex form of consciousness.”)

What’s more, these thought-provoking traits arose in a separate genetic lineage from humans and the rest of the neurologically complex vertebrates: Our most recent common ancestor with the octopus was a blind, Precambrian wormlike creature, according to Zivitilli. But after 600 million years of divergent evolution, what’s most remarkable are the points at which the octopus and the intelligent mammals have converged.

Researchers marvel at their curiosity, unparalleled in other invertebrates. Though any organism fashioned through natural selection is bound to inquire after mates and sustenance, the probing of an octopus is pronounced even when it stands to gain neither — Zivitilli says they appear just as interested in objects that don’t resemble any food they’ve eaten.

More whimsically, he recalled one tiny octopus that settled into a pill bottle floating near the top of its tank and sometimes spun the cylindrical den like a hamster wheel, apparently with no purpose but its entertainment.

They extend this curiosity to humans, too. Many anecdotes seem to suggest octopus can even feel companionship toward the strange figures that enter their watery realm, with the documentary My Octopus Teacher a recent example. It’s especially odd in light of their solitary nature: How could the emotions of interpersonal dynamics apply to an animal that evolved as a loner?

“I’m not going to say there is no companionship,” Zivitilli says. “I would say it’s up for interpretation.” But he added that a human need not appear as “anything more than a big complicated rock for the octopus to be OK with it hanging out.”

Still, their ability to remember people, and greet certain ones with either hostility or gentleness, strikes Godfrey-Smith as “genuinely surprising and noteworthy.”

No one has solved Nagel’s problem — the minds of non-human species remain ultimately off-limits. Scientific advances may someday break down the wall that stands between us and the subjective experience of “the other,” including the octopus. But until then, those who know them best can’t escape the feeling that they aren’t so “other” at all.

“There’s just something about them,” Zivitilli says. “They’re different, but familiar.”