Home Sport ‘Having an athlete mindset was my survival mechanism’ 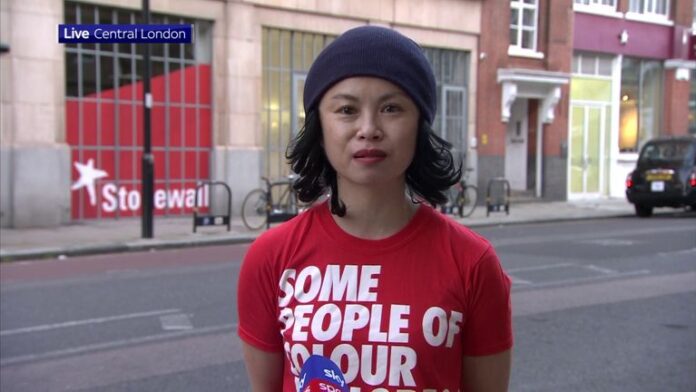 Sport’s capacity to build self-confidence and boost mental health are intrinsic to the Rainbow Laces message, says Amazin LeThi, one of the campaign’s athlete ambassadors.

LeThi, a former competitive bodybuilder who is now the first Asian Stonewall Sport Champion, spoke to Sky Sports News from outside the charity’s London headquarters as the inclusion initiative’s annual activation got underway.

Her remarkable journey – as a foster child, she left Vietnam for Australia, and went on to take up weightlifting in order to stand up to bullies, while also being homeless for a time during her teenage years – has inspired many around the world, and led to her setting up The Amazin LeThi Foundation to advocate for LGBTQ equality through sports.

“Sports became my haven but that bullying still followed me, along with the stereotypes of what it is to be Asian in sports.

“Now I want to raise my voice about the challenges and barriers that Asian and Asian LGBTQ athletes still face. In Britain, we just don’t have the numbers of Asian athletes.”

LeThi highlighted a 2019 study showing that out of approximately 3,700 footballers playing professionally in England and Wales in the preceding season, just 12 were of Asian heritage – a lowly 0.3 per cent of the total number, despite British Asians constituting approximately five per cent of the population.

For LeThi herself, the challenge she faced was two-fold due to her race and her sexuality – but her passion for sport gave her the fortitude to progress in bodybuilding, despite the bullying she endured.

“I loved sports so much because it gave me a sense of purpose, and helped with my confidence and self-worth,” she added.

“It also gave me a very unique skill set that I’m able to use in all different areas of my life. Having that kind of athlete mindset has really become a survival mechanism for me and it’s built a tremendous amount of resilience in me as well. It was about never wanting to be able to give up.

“Sport has been there whenever I’ve had challenges or difficulty in my life, such as through the pandemic. For LGBTQ people, it’s so important for our mental health.

“Sports should be made available to everyone, and everyone should have access, particularly children at a very young age, to be able to start on that fast track to how you can thrive through sports.”

LeThi believes visible signs of inclusion from sports teams and coaches such as Rainbow Laces are helpful reminders to athletes of any age who might feel isolated, letting them know that they are welcome and supported by allies.

Everyone can get involved with #RainbowLaces campaign today with @stonewalluk by lacing up – this time with a new range of identity laces. Make sure you get yours https://t.co/JEWDuAoY5v#StonewallUK #OutAthlete #LGBTQ #OutSports #Asian #British #Sports #Athlete #AthleteActivism pic.twitter.com/A5ZMgusso2

“There are some fantastic organisations like Stonewall that are championing sports equality and that’s very important – to make sure you have that support network,” she added.

“I also hope that my presence as an out athlete presents a very positive role model for other Asian athletes that want to be out in sports.

“Rainbow Laces sends a very strong message. Athletes now are like pop stars – they have millions of followers. It’s so important when an athlete stands up and becomes part of the campaign and shows that they support LGBTQ athletes in sport.”

Sky Sports is a member of TeamPride which supports Stonewall’s Rainbow Laces campaign. If you’d like to help inspire others in sport by sharing your own story of being LGBT+ or an ally, please contact us here.