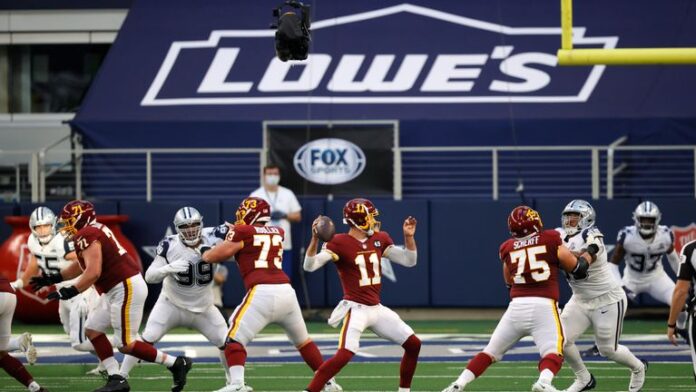 Rookie running back finishes with 115 yards on 20 carries and three touchdowns – the first player to score a Thanksgiving hat-trick since Randy Moss; Washington score three fourth-quarter TDs in the space of nine minutes to crush Cowboys

Antonio Gibson rushed for three touchdowns as the Washington Football Team climbed into first place in the NFC East with a 41-16 dismantling of the Dallas Cowboys on Thanksgiving Day.

Rookie running back Gibson had his second 100-yard day against Dallas this season, rushing for 115 yards on 20 carries and finding the endzone three times – the first player to score a Thanksgiving hat-trick since Randy Moss did it against Dallas with the Minnesota Vikings in 1998.

The game was a cagey, tight affair reflective of the two teams’ struggles this season, until Washington broke away with three touchdowns in the fourth quarter, the second of which – Gibson’s third – came on the first play from scrimmage following a disastrous fake punt attempt by Dallas on fourth-and-10 from their own 24-yard line.

Washington had led by just fourth points, 20-16, at the end of the third quarter, but that touchdown put them up by 18 to all but end the contest, only for Montez Sweat to pile on the misery with a pick-six interception of Andy Dalton.

Washington improve to 4-7 on the season, passing the Philadelphia Eagles (3-6-1) for the NFC East division lead, while the Cowboys slip to the foot of the standings at 3-8.

Alex Smith completed 19 of 26 passes for 149 yards with a touchdown and an interception for Washington, two years on from a horrific leg injury that saw him almost lose his life, Cowboys QB Dalton connected on 25 of 35 attempts for 215 yards, with a score and that Sweat interception.

Dallas had opened the scoring in the game with the first of three Greg Zuerlein field goals, a 33-yarder midway through the first quarter. Washington then took a 7-3 lead with Gibson’s first TD, ran in from the five-yard line.

Dalton had Dallas back ahead 10-7 when he hit Amari Cooper in stride for a 54-yard touchdown 44 seconds into the second quarter.

Washington tied things up seven minutes later with a Dustin Hopkins 23-yard field goal and then retook the lead as Logan Thomas caught a five-yard touchdown pass from Smith with two and a half minutes remaining in the first half, leaving enough time for Zuerlein to fire through another FG for the Cowboys.

The two teams traded further field goals in the third quarter as both offences continued to misfire; Washington first fired one through the posts following off the back of an Ezekiel Elliott lost fumble, while the Cowboys had to settle for just three points when starting a drive four yards out from the goal line after a 43-yard interception return by Jaylon Smith.

Then, in the fourth quarter, Washington streaked away with three touchdowns scored in the space of nine minutes to crush the Cowboys.