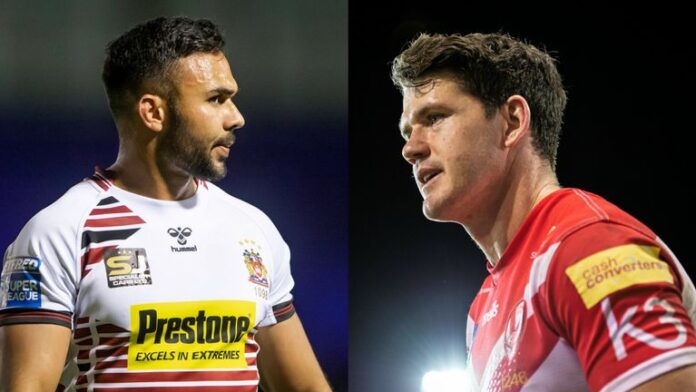 We take a look at what is being said, team news and how to follow this year’s Super League Grand Final across Sky Sports as Wigan Warriors and St Helens go head-to-head for the title at the KCOM Stadium…

There may have been times when it seemed like the 2020 Super League season may never reach this stage, but despite a near four-month interruption and issues caused by the coronavirus pandemic, a champion will be crowned on Friday evening.

It will not be the usual surroundings for the Grand Final. Old Trafford’s unavailability means Hull’s KCOM Stadium hosts the match, and it will be played without a crowd due to ongoing Covid-19 restrictions.

Nevertheless, it should be a cracking contest as League Leaders’ Shield winners Wigan take on reigning champions St Helens, and one Warriors head coach Adrian Lam is excited to be part of.

“It’s a gold medal for Super League to have two big clubs playing each other in the Grand Final,” Lam said.

“It’s been a long time coming, but I think the game will be as good as we’ve seen all season.”

Opposite number Kristian Woolf praised Super League for getting the season to a conclusion, but also heaped plaudits on the players across the whole competition.

Wigan-Saints: The rivalry and the hostility

Adrian Lam, James Roby, Sean O’Loughlin and Kristian Woolf on the rivalry between their clubs ahead of the Grand Final.

“The players more than anyone deserve all the credit we can give them,” Woolf said. “They’ve shown tremendous sacrifice and discipline without crowds and with a lot of restrictions.

“The one thing I don’t think anyone could argue with is the fact the players have gone out and played just as good footy as they would with crowds.”

If St Helens can retain the title, it would mark only the fourth time since the Grand Final was instituted in 1998 that a team has made it back-to-back triumphs.

James Roby knows exactly what it would mean for the side to write their names in history in that manner and the St Helens captain is eager to do so having returned to the showpiece match.

“It’s not been done many times, but we’ll be doing everything we can to achieve that.”

Wigan go into the match buoyed by their 18-6 victory over their rivals in the regular-season clash at the end of October and skipper Sean O’Loughlin does not believe this year’s Grand Final being played behind closed doors will diminish the achievement of whichever team triumphs.

“It will be as special as any other,” O’Loughlin said. “The crowd won’t be there to witness it, but you feel like you’re still representing the sport and I’m sure the eyes on the game will be as big as ever.

“The game a few weeks back was probably the most intense we’ve seen this year and we’re expecting the same.”

One of the most anticipated head-to-heads of this year’s Grand Final is the battle between two of the Man of Steel nominees, full-backs Bevan French and Lachlan Coote.

Scotland international Coote continued the impressive form which saw him nominated for Super League’s top individual accolade for the second year running by scoring and creating tries, while French has excelled in his first full season in a Wigan shirt.

The creative pair of St Helens’ Jonny Lomax and 2019 Man of Steel Jackson Hastings, back in the Grand Final this year with Wigan, will be one to watch too, although the platform for all of those to excel will be laid by whichever forward pack can get on top.

Sky Sports will be bringing you live coverage of the match from the KCOM Stadium, going on air on Sky Sports Arena from 7pm and 7.30pm on Sky Sports Main Event ahead of kick-off at 8pm.

Joining our regular panel of pundits and commentators are former Grand Final winners Danny McGuire, Jon Wilkin and Jason Robinson, all of whom will share their own unique insights for the contest.

As well as that, you will be able to follow all of the action between Wigan and St Helens on the website with our live blog, where we will also have a report, video highlights and post-match reaction.

Don’t forget to watch the ‘Rob Burrow: The Magnificent 7’ documentary on the Leeds Rhinos great and his battle with motor neurone disease at 6.30pm as part of our Grand Final build-up as well.