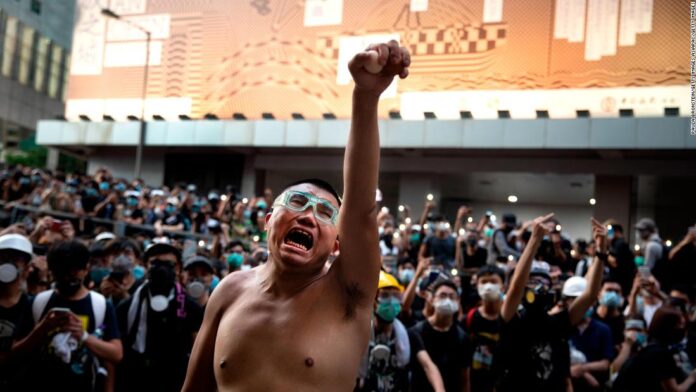 In handing down her sentence Thursday, Magistrate Winnie Lau said that while “an egg is not a weapon of mass destruction,” the throwing of such items at a police station provoked “discontent” with the force, undermined officers’ law enforcement actions, and endangered society, according to public broadcaster RTHK.
Pun Ho-chiu’s case comes as courts face a backlog of thousands of arrests related to last year’s political unrest, during which Hong Kong was rocked by increasingly violent anti-government protests for months.
The large number of prosecutions, as well as pressure for tough sentences, has put judges in a delicate position, particularly as Beijing has tightened its grip on the semi-autonomous city this year. In July, Chinese authorities introduced a national security law for Hong Kong, bypassing the city’s legislature to criminalize secession, subversion and collusion with foreign forces.
Judges seen as overly lenient or sympathetic toward protesters have come in for criticism from Chinese state media and pro-Beijing newspapers in Hong Kong. Writing in the state-run China Daily in September, one commentator said that “in theory, judges must not take political sides in a court of law, but in Hong Kong many members of the public now see some judges as ‘yellow judges’ who practice political favoritism for offenders from the opposition camp.”
In a statement this week, the Hong Kong Bar Association said it “deplores irrational and unrestrained attacks on the Judiciary and members of the Judiciary” and urged media to stop speculating on the political beliefs of judges.
Some judges have also come under fire for showing alleged bias against protesters. In May, Chief Justice Geoffrey Ma removed District Court judge Kwok Wai-kin from protest cases after he described a man who had stabbed three people at a pro-democracy “Lennon wall” as a “victim” whose livelihood had been affected by people “behaving like terrorists.”
“Judges have a responsibility under the Basic Law, owed to the community, to exercise independent judicial power by adjudicating on cases fairly and impartially, without fear or favour,” Ma said in a statement.
Hong Kong has long prized its independent judiciary and rule of law, characteristics which set the city apart from mainland China, where courts are subject to the whims of the ruling Communist Party, and some 99% of cases end in a guilty verdict.
This independence has become all the more important as political dissent has been increasingly curtailed by the new security law. Last week, the entirety of the democratic opposition resigned from the city’s legislature after authorities in Beijing moved to expel several lawmakers.
Meanwhile, RTHK reported Thursday that the Hong Kong government would soon require all civil servants to swear an oath of allegiance.
And there are signs Hong Kong may be moving toward a more-politicized judicial system too. Since the 2014 Umbrella Movement, during which large numbers of mostly young people came out in support of increased political representation, the government has been accused of waging “lawfare” on activists and protesters, bringing large numbers of prosecutions and demanding tough penalties. The Beijing government has also intervened in several cases in recent years, exercising a previously rarely-used constitutional power to rewrite the city’s laws.
Earlier this month, Zhang Xiaoming, one of the top Chinese officials in Hong Kong, said that “reforms” were needed for the city’s judiciary, and that “the word ‘patriotism’ should be added before the core values ​​of democracy, freedom and human rights advocated by Hong Kong society.”
“We must defend the city’s rule of law, but we must also safeguard the national constitutional order,” Zhang said, adding that many “problems” had been exposed in the city’s de facto constitution that needed to be addressed.
Speaking during her annual policy address on Wednesday, Hong Kong’s Chief Executive Carrie Lam said the national security law was already having the desired effect.
The law had been “remarkably effective in restoring stability in Hong Kong,” she said, and had brought an end to protests.
Lam added that the city’s Department of Justice “will continue to showcase that Hong Kong remains a neutral and effective international legal hub”, but also announced a new bill that will allow local courts to “deal” with lawmakers who might break the oath-taking process when being sworn in as legislators.
The national security law has already greatly altered the judicial system, creating specialized courts for hearing sensitive cases and allowing for some defendants to be transferred to the mainland for trial.
In September, a veteran Australian judge resigned from the city’s Court of Final Appeal. James Spigelman, who did not respond to a request for comment, told Australia’s public broadcaster ABC at the time that his decision was “related to the content of the national security legislation.”
Many distinguished foreign jurists sit on the CFA as non-permanent judges, bringing both legal expertise and a sheen of independence to the court, long seen as the final bulwark against pressure from Beijing.
That may shift as a result of the law, however. Chinese officials previously expressed skepticism about whether foreign judges could be trusted to hear national security cases, while in a report this month, British Foreign Secretary Dominic Raab said he had begun consultations on whether it was appropriate for UK judges to continue to serve on the court.
“Hong Kong’s independent judiciary is a cornerstone of its economic success and way of life,” Raab wrote. “The National Security Law provides that Hong Kong’s Chief Executive, rather than the Chief Justice, will appoint judges to hear national security cases. In addition to the provisions in the National Security Law that allow the mainland authorities to take jurisdiction over certain cases without any independent oversight, and to try those cases in the Chinese courts, this move clearly risks undermining the independence of Hong Kong’s judiciary.”
He added that London will “monitor the use of this requirement closely, including its implications for the role of UK judges in the Hong Kong justice system.”