Home Culture Giving thanks for Baby Yoda this pandemic year 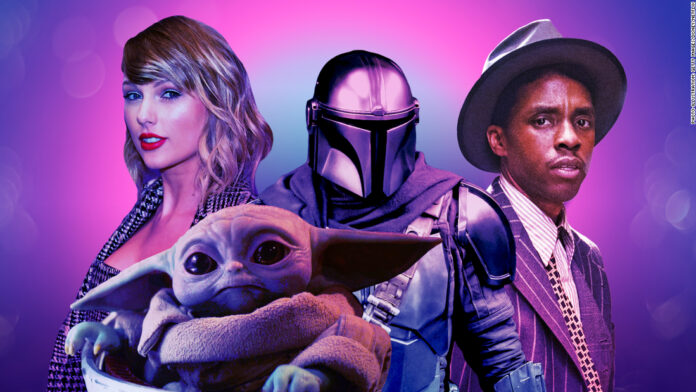 As we all struggle through the year that has been WTF (which, for the purposes of being family-friendly, we will say stands for “Worse Than Failure”), let’s round up some of the reasons we can be thankful for pop culture:
Streaming, streaming, streaming: Because you can only walk the dog and “edit” your house but so many times (I’m really regretting donating that humidifier, but that’s for another time). I, for one, am beyond grateful for the multitude of streaming content.
There is literally something for everyone.
Don’t believe me?
Netflix has “The Speed Cubers,” billed as a documentary that “captures the extraordinary twists and turns in the journeys of Rubik’s Cube-solving champions Max Park and Feliks Zemdegs.”
A doc aimed at lovers of Rubik’s Cube is the very definition of “niche.”
More from Pop Life Chronicles
Plus, there are new streaming services like HBO Max (owned by CNN’s parent company) and NBC’s Peacock so you are in no danger of running out of shows anytime soon.
Not to mention new episodes of “The Mandalorian” on Disney+, which leads us to the two cutest words in the world: Baby Yoda.
Music is still happening: Major concerts are on hold, but artists are still figuring out ways to connect with their audiences.
There are drive-in concerts, Verzuz battles on Instagram Live — some of us treated the latest one featuring rappers Jeezy and Gucci Mane like a night out at the club — and virtual shows.
Here’s something to look forward to: Kiss has announced a virtual “Kiss 2020 Goodbye” concert, to be held on New Year’s Eve.
So, get ready to “Rock and Roll All Nite.”
We still have more to anticipate: Entertainment is the gift that keeps on giving.
The “Wonder Woman” sequel is due for release on Christmas Day, and in the upcoming awards season, we can count on plenty of talk about Chadwick Boseman’s final performance in Netflix’s “Ma Rainey’s Black Bottom.”
The industry is determined to keep on keeping on in taking our minds off of our woes.
Thank you, Hollywood.

Three things to watch:
‘Folklore: The Long Pond Studio Sessions’
Say what you will about Taylor Swift, but she is a heck of a songwriter.
And where there is a good song, there is most always a good story. Thanks to her new film on Disney+, we will get the stories behind her latest album, “Folklore.”
Taylor Swift, Aaron Dessner (The National), Jack Antonoff (Bleachers) and Justin Vernon (Bon Iver) created the album and come together to perform all 17 songs and spill the tea.
“Folklore: The Long Pond Studio Sessions” is currently streaming on Disney+.
‘Crazy, Not Insane’
As a true crime buff, I found the HBO documentary about psychiatrist Dorothy Otnow Lewis and her career-long study of murderers to be right up my alley.
Are people born evil or do they become that way? You will have to watch to see what Lewis believes based on her work.
“Crazy, Not Insane” is currently airing on HBO, which is owned by CNN’s parent company.
‘A Charlie Brown Christmas’
It’s the Vince Guaraldi soundtrack that does it for me.
In fact, it just wouldn’t be the holidays without “A Charlie Brown Christmas.”
Apple TV+ acquired the rights to the beloved Peanuts holiday special and made a deal with PBS to stream it via its subscription service.
If you missed it on PBS and don’t have Apple TV+, PBS will reair the holiday special on December 13. And, yes, I know it’s Thanksgiving — Apple TV+ has got you there too as “A Charlie Brown Thanksgiving” is free to watch via its app through Friday.
Two things to listen to:
Through it all, she has kept making music. Her latest album, “Plastic Hearts,” drops Friday.
If her new single with Dua Lipa, titled “Prisoner,” is any indication, we are in for some good tunes.
How is it album number 11 already for The Smashing Pumpkins?
It seems like only yesterday that the band burst on the scene to warm our alternative-rock hearts.
Now the alt-rockers are back with “Cyr,” of which a review in Clash noted, “Billy Corgan’s attempt to make a fun and breezy record while fundamentally not understanding either of these concepts has resulted in a simply astronomical level of campness that I am fairly convinced he doesn’t even recognise, let alone understand.”
Count me in when “Cyr” drops Friday.
One thing to talk about:
I’m all for artists finding creative ways to make a point. The Weeknd, however, had plenty of people scratching their heads when he received the first award of the night on Sunday at the American Music Awards.
The singer took to the stage sporting a red suit jacket, black shirt, black trousers and a fully bandaged face to collect the trophy for favorite soul/R&B album for “After Hours.”
The mummy look had some confused and others concerned, given that he had on the same outfit but with a bloody face and nose bandage in March when he performed on “Saturday Night Live.”
He had explained to Esquire magazine that his hit single “Blinding Lights” is about “how you want to see someone at night, and you’re intoxicated, and you’re driving to this person and you’re just blinded by streetlights, but nothing could stop you from trying to go see that person, because you’re so lonely. I don’t want to ever promote drunk driving, but that’s what the dark undertone is.”
So, perhaps that was it? Here’s a tip, though: If you are trying to make a statement and folks aren’t quite getting it, you haven’t really made a statement.
Also, so sorry the Grammys snubbed you, sir.

This holiday season, be kind to yourself and others. These are scary times we are living in, and we are all trying to navigate it as best as we can.
If you are struggling to find something to be thankful for, grab hold of the fact that you are alive and well enough to be reading this newsletter.
You, being here, right now, is something that I am enormously grateful for.
Pop back here next Thursday for all the latest entertainment happenings that matter.