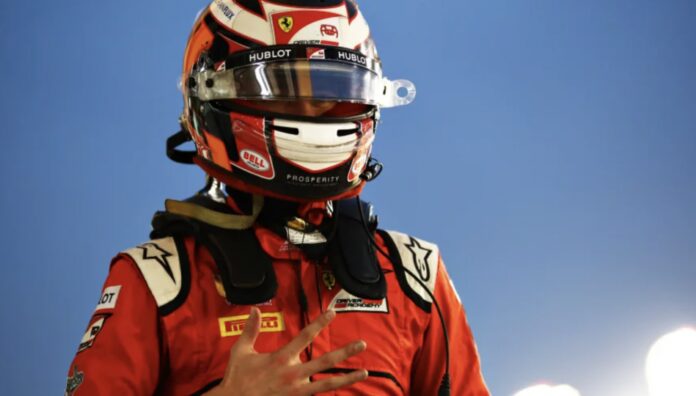 Callum Ilott is not giving up the Championship battle without a fight, slashing Mick Schumacher’s lead at the top of the Drivers’ standings to just 18 points, with his fifth pole position of the season in Qualifying at Sakhir.

The UNI-Virtuosi driver dominated the session from start to finish, setting his time early on to beat out Felipe Drugovich by nearly fourth tenths of a second, while Dan Ticktum snatched third.

There was no waiting around as all 22 cars fed out onto the track when the light went green in the pitlane. Led out by Drugovich, it was the ART Grand Prix of Marcus Armstrong who set the pace, lapping at 1:42.052.

With the title at stake, Ilott got his weekend off to a sterling start, smashing Armstrong’s time by half a second to put himself at the top of the timesheet.

The third of nine mathematical title rivals, Yuki Tsunoda, wasn’t enjoying such a positive afternoon, as the Carlin rookie was devastatingly forced to retire from Qualifying following a spin at Turn 12. Tsunoda attempted to get going again but stalled, bringing out a red flag and ending his session without a time on the board.

Drugovich and Ticktum fired up to second and third but neither of them could touch Ilott, who was nearly four tenths faster. The Briton was the first car back in the pits, satisfied with his work in the first stint.

Tsunoda wasn’t the only title rival enduring a difficult afternoon, with the Championship leader, Schumacher, down in 12th, while Nikita Mazepin failed to set a time in the opening stint. The German’s first flying lap on his second stint wasn’t much better either, as he could only manage P10, eight tenths short of Ilott.

Mazepin finally managed to get a time on the board when the cars returned from the pits, climbing all the way to seventh on his first attempt. Most impressive of all was Guiliano Alesi, who leapt to a career-high sixth with three minutes to go.

That proved to be the final action of the session, as the Frenchman pulled up with mechanical issues. The stranded MP Motorsport machine brought out a red flag and the decision was made to end the session early, with less than two minutes left on the clock.

Ilott, Drugovich and Ticktum retained their positions in the top three, with Armstrong and Guanyu Zhou completing the top five. Alesi sealed his best ever F2 qualifying result with sixth, ahead of Mazepin and Jehan Daruvala. Another of the title contenders, Christian Lundgaard, was down in ninth, one place ahead of Schumacher.

Ilott will be eying up a fourth win of the season in the Feature Race on Saturday at 12.10 (local time), while Schumacher will require another one of his trademark strong starts if he is to prevent his FDA rival from closing the gap in the Championship fight.