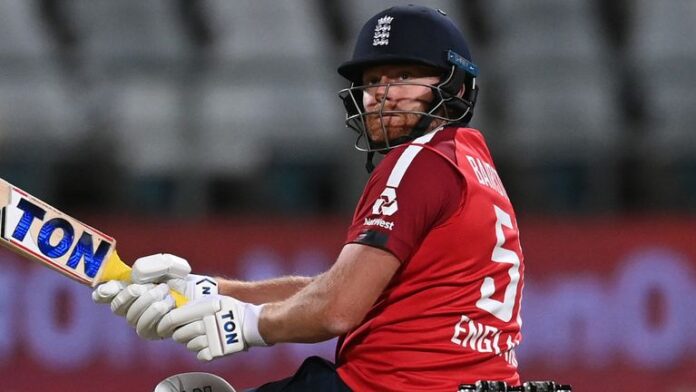 ​​​Jonny Bairstow thumps four sixes and nine fours in 86 not out from 48 balls as England chase down 180 to beat South Africa in first T20 international; Sam Curran bags 3-28 with the ball but brother Tom Curran hammered for 55 from his four overs in Cape Town

​​​Jonny Bairstow powered an unbeaten 86 from 48 deliveries after Sam Curran impressed with the ball as England beat South Africa by five wickets in the opening T20 international in Cape Town.

Bairstow fired from his new No 4 berth to rally the tourists from 34-3 and lead them to their victory target of 180 with four balls remaining, with his fourth six – allied to nine fours – sealing his team’s win.

The 31-year-old blasted 85 for the fourth wicket with Ben Stokes (37 off 27) after the two men preferred to him for the opening spots, Jason Roy (0) and Jos Buttler (7), had fallen cheaply.

Bairstow carried on his onslaught after Stokes’ dismissal, with Beuran Hendrick’s 28-run 17th over swinging momentum firmly in England’s favour and Bairstow then clubbing Lungi Ngidi’s first two balls of the final over to the fence.

Eoin Morgan’s side have drawn first blood in the three-match series – which continues in Paarl on Sunday, live on Sky Sports Cricket from 12pm – and inflicted defeat on South Africa in the hosts’ first game since March.

Bairstow’s classy knock – at the same venue where he had scored his maiden Test hundred in 2016 – underpinned England’s successful run chase but Sam Curran was the star for the tourists with the ball, on an evening in which his older brother Tom suffered a chastening experience.

Sam bagged his T20I-best figures 3-28 from his four overs, including the scalp of South Africa top-scorer Faf du Plessis (58 from 40 balls), but Tom was smashed for his most expensive figures in the format of 1-55.

Sam Curran’s initial wicket – that of Temba Bavuma caught behind on the scoop for five in the first over – meant an early introduction for Du Plessis and the 36-year-old went on to star in South Africa’s 179-6.

However, he then top-edged an excellent short slower ball from Sam Curran into the deep in the 14th over, as England continued a comeback that had begun when De Kock drove Chris Jordan to cover in the 10th.

Rassie van der Dussen (37 off 28), Heinrich Klaasen (20) and debutant George Linde (12 off 6) struck six boundaries between them in the final six overs before falling to a Jofra Archer full toss, a Sam Curran short ball and a Tom Curran yorker respectively.

Tom Curran finally had a moment to cheer from the final ball of the innings when, after seeing full tosses crunched for four and six by Linde, he smashed the new boy’s stumps.

Linde’s cameo with the bat was followed by two wickets in the powerplay – Roy (0) under-edging behind to De Kock in the first over and No 1-ranked T20I batsman Dawid Malan (19) sweeping the spinner to square leg in the sixth over, with Lungi Ngidi taking a fine catch diving forward.

With Buttler also exiting for seven in the fifth over – the wicketkeeper-batsman skying Ngidi to cover – South Africa were well on top, only for Bairstow and Stokes to revive the England innings.

The partnership included back-to-back sixes for Bairstow off Tabraiz Shamsi over the leg-side and Stokes’ two maximums in the same Klaasen overs as England reached 119-3 after 14 overs, with Bairstow completing a 30-ball, sixth T20I half-century with a four off Hendricks.

Linde was then in the game again, though, pouching at long-on as Stokes failed to dispatch a long-hop from spinner Shamsi and England’s requirement soon looked tricky with 51 required from four overs.

However, Hendricks’ wide and boundary-infested 17th over changed that to 23 from 18 and although Eoin Morgan (12) holed out to deep midwicket off Ngidi in the 18th, Sam Curran nailed a six off Kagiso Rabada in the 19th and Bairstow sealed matters in the 20th.

Watch the second T20 international, in Paarl, live on Sky Sports Cricket from 12pm on Sunday.