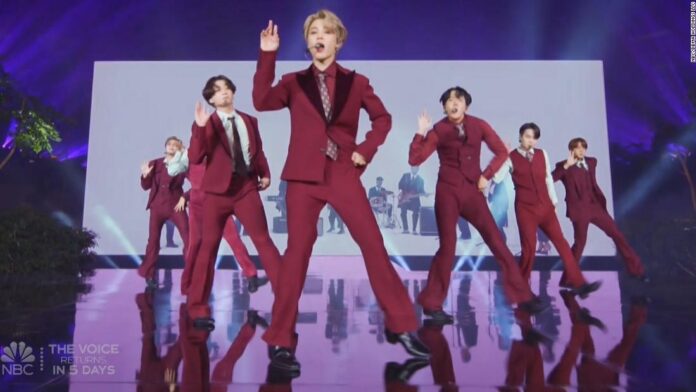 They were nominated for the Best Pop Duo/Group Performance category, alongside other pop giants like Lady Gaga and Ariana Grande, Taylor Swift and Bon Iver, and Justin Bieber and Quavo.
The group posted a video of their live reaction on Twitter after the announcement, captioned with an excited keyboard smash. In the video, four of the seven members — V, Jungkook, RM and Jimin — wait anxiously on a couch, appearing on the edge of their seats, before jumping up and cheering when their nomination is announced.
In a separate post afterward, the band thanked their fans for supporting them during “difficult times,” and the Recording Academy “for this great honor.” The video has racked up nearly 12 million views and 1.8 million likes.
“Dynamite,” a mix of electric-synth disco and bubblegum pop, marks BTS’s first single sung completely in English. After its release this August, the song racked up 101.1 million views by the end of its first day, becoming the most-viewed music video premiere on YouTube. It sat atop the Billboard Hot 100 chart for two weeks — the first time a K-pop group has achieved this milestone.
“[The inspiration for] it all began from this: even in the midst of hardships, we must focus on what we can do,” the band told the Grammy’s in August. “As for us, we found freedom and happiness in singing and dancing. This song goes to the ones who need encouragement. We hope people feel energized when listening to the song.”
Fans of the band, who call themselves ARMY (which stands for “Adorable Representative M.C. for Youth”), celebrated the news online, some arguing that the nomination was a long time coming, given the band’s breakthrough success with US audiences. Many had hoped for a nomination at last year’s Grammy’s, and voiced outrage on social media when the group was shut out.
“We grew up watching the Grammys, so we know of its significance. And it would be incredible if we could be nominated,” one member, Suga, told CNN this September. “We never had a Grammy in mind when we first began, but it’s now become a more tangible dream.”
BTS first performed in Los Angeles in 2014, and toured the country in 2015 and 2017. They became the first K-pop act to win a Billboard Music Award and make the top 10 of the Billboard 200 charts in 2017; later that year, they made their US television debut, performing at the American Music Awards. Their fame has only grown since then; this year, they brought home two prizes at the American Music Awards, and closed out the ceremony with a performance of “Dynamite.”
They weren’t the first K-pop group to try to break the overseas market; YG Entertainment’s Big Bang has had some success in international music awards and performance charts. But BTS’ social media presence has helped grow their fanbase around the world; the ARMY regularly produces English subtitles and texts of their content, connecting BTS with their non-Korean speaking audience.
The group and the ARMY also gotten involved in international social activism; the group donated $1 million to Black Lives Matter in June, prompting their fans to match the donation.
The Grammy Awards will be broadcast on January 31, hosted by “The Daily Show’s” Trevor Noah. The full list of 83 categories and nominees is available here.

Watergate inspired movies. The Trump era history will likely be told on TV

Cheers, my dears. ‘Bridgerton’ is returning for a second season