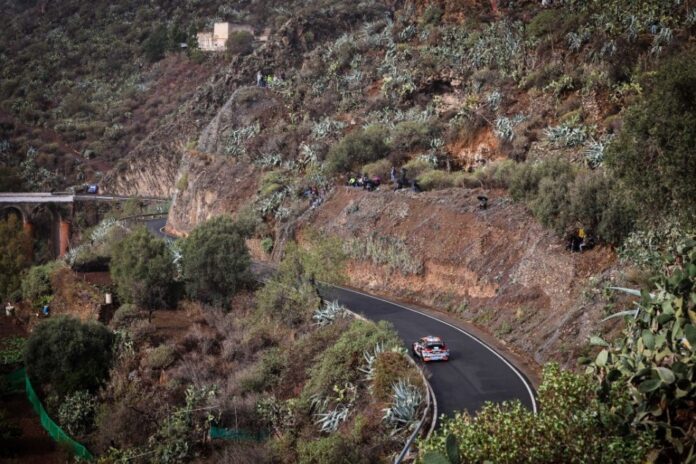 Iván Ares tops an end-of-leg FIA European Rally Championship leaderboard for the first time after completing Saturday’s action on Rally Islas Canarias with a 7.5s advantage over Adrien Fourmaux, as changeable weather conditions made tyre compound choice a lottery and required drivers to be at their very best on Gran Canaria’s challenging hillside roads.

Nil Solans had been the man to beat after six stages, but a spin on SS7 cut his lead over Ares from 16.1s to 3.1s. And with Solans experiencing the worst of the rain on SS8, Ares was able to move in front by 10.5s heading to the DISA-sponsored Las Palmas de Gran Canaria street stage.

Although the 1.53-kilometre test was held in dry conditions for the first four crews, which included Fourmaux, by the time the stage resumed following a brief stoppage due to a non-rally-related incident, it was raining, leading to the remaining runners losing time in the slippery conditions.

“It was difficult to make the right tyre choice and find the grip but it has been a good day and I’m happy,” said Ares, who drove his Pirelli-equipped Hyundai i20 R5 to second-place ERC points on Rally Fafe Montelongo last month.

Fourmaux, whose only previous ERC appearance ended in a huge crash on July’s Rally di Roma Capitale, said he was “really happy” to be leading ERC1 Junior in second overall on his Rally Islas Canarias debut. “We had really tricky conditions but we had good pace and a good tyre choice,” said the Michelin runner, who was quickest on SS7 and SS8 in his M-Sport Ford World Rally Team-run Fiesta R5 MkII.

For Solans, his late delay was poor reward for a strong performance for a driver making his debut in the ERC and on Rally Islas Canarias. “I didn’t expect the Tarmac to be as slippery as it was, we did the correct tyre choice, that’s true but we still need to improve the car set-up,” said Solans after vacating his Michelin-shod Škoda Fabia Rally2 Evo prior to midday service at the Estadio de Gran Canaria. “I have done a lot of work with my pacenotes, they are so descriptive and with these circumstances it’s much easier.”

The 19-year-old kept out of trouble despite his lack of event knowledge and not always being on the right tyres for the ever-changing conditions. “It was a very difficult morning with very bad conditions,” said the Volkswagen Polo GTI R5 driver, who is challenging for both the overall and ERC1 Junior titles this weekend. “It’s not easy, very slippery but I was on the limit many times. I could have gone faster but it was way too risky so I just wanted to survive without making any mistakes so I’m happy. I don’t try to think about the title so much. There’s still a very long way to go and we’ve had difficult conditions.”

Alexey Lukyanuk, the European championship leader after four rounds, was the last of the Rally2 drivers to start leg one, a tactical move to try to benefit from what he believed would be drier conditions this morning. However, the rain was far heavier and frequent than he expected and he struggled to make an impact this morning as a result.

It got better for the Saintéloc Junior Team driver this afternoon when he set the fastest time on SS5 and SS6. But rain on SS7 and SS8 was unexpected based on his forecasts and meant for a frustrated Russian. “We enjoyed two dry stages and that’s what I was keeping in my heart for the memories of this event but all the other parts was not good,” said Lukyanuk, who remains on course for his second ERC title in three years. “We are pleased with the position but [the tyre choice is] a lottery and you can’t make it right.”

Canary Islander Yeray Lemes is P10 after nine stages with Andreas Mikkelsen battling back to P11 after the Rally Hungary winner haemorrhaged time during the morning rain when he selected dry-weather Pirelli covers for his Topp-Cars Rally Team Škoda Fabia.

Despite his limited knowledge of his C3 R5, double ERC Junior champion Marijan Griebel showed strong form including a top-three stage time this morning. But he was unlucky to drop 15s on SS8 when his windscreen misted up and he struggled for vision. The German is ninth at the overnight halt.

Niki Mayr-Melnhof is P21 after overcoming clutch issues this morning. A puncture delayed Josh McErlean in the second Motorsport Ireland Rally Academy Hyundai. Pepe López’s bid to repeat his 2019 Rally Islas Canarias victory ended when he crashed out on SS1. Erik Cais was in the top six when he retired his Yacco ACCR Team Fiesta after striking a bridge on SS5.

Munster needs magic in ERC1 Junior title chase
Grégoire Munster’s ERC1 Junior Championship bid was hit hard by a puncture on SS1 and his choice of dry-weather tyres for the rain-affected opening loop. The Hyundai Junior Driver is therefore currently destined to fall short in his pursuit of the title and the €100,000 grant on offer to the winner with Oliver Solberg holding the initiative heading into Saturday’s decisive leg.

“It was really difficult to get the right forecast for the weather conditions,” said the Luxembourg talent, who is sixth in class after leg one. “We were the most aggressive with the tyre choice and it did not pay off. It was really difficult to get the grip actually. We did not find any for the four stages. The afternoon was much better but the time we lost we cannot get back easily and we almost crashed on the first corner [of SS9].”

The Citroën España-supported Llarena was third in the ERC1 Junior starting the event, but also suffered a tough opening day due. “It was so difficult,” he said. “We pit slick tyres and a medium set-up. It was a disaster and I was wishing to end the rally because I’m not happy. The spare rear differential is exactly the same so we can’t change.”

Bassas shows his class for Rallye Team Spain
Pep Bassas has excelled throughout leg one in his Pirelli-equipped Peugeot 208 Rally4 by going quickest in ERC3/ERC3 Junior on six stages. He holds a lead of 26.3s over Sindre Furuseth, the Norwegian making his first start in the European championship this season in a Saintéloc Junior Team Peugeot.

In ERC3, debutant Jorge Cagiao is fifth ahead of Sergio Fuentes and top female driver Adrienn Vogel. Chris Ingram, the 2019 outright champion, is ninth in ERC3 on his championship comeback in a Toksport Clio. Ekaterina Stratieva is P12 in ERC3 but Łukasz Lewandowski retired with gearbox issues.

Abarth-powered Poloński in Pole position to win ERC2
Dariusz Poloński’s return to ERC2 action is going to plan with the Polish driver leading the production-based category in his Abarth 124 rally. Poloński, who also tops the Abarth Rally Cup ranking, heads ERC2 champion elect Tibor Érdi Jr with Andrea Mabellini demoting Dmitry Feofanov for third on SS9. Mabellini can’t be caught in the Abarth Rally Cup title fight but is in contention to win the ERC2 title, making a brake issue in the morning a frustrating experience for the young Italian. Zelindo Melegari was third in ERC2 in his Alpine A110 RGT but crashed out on SS7.

What’s next?
The 44th Rally Islas Canarias and the 2020 FIA European Rally Championship will be decided tomorrow (Saturday) with eight stages over a competitive distance of 102.10 kilometres. SS11 (10h29) and SS17 (15h45) will also be shown live on Facebook and YouTube while ERC Radio will be live throughout the day. Highlights from leg two will be shown on Eurosport and Eurosport Player at 00h30 CET on Sunday. The ERC All Access magazine show will be broadcast on Eurosport at 00h30 CET on December 2, while the extended Rally Review programme is distributed to global broadcasters.