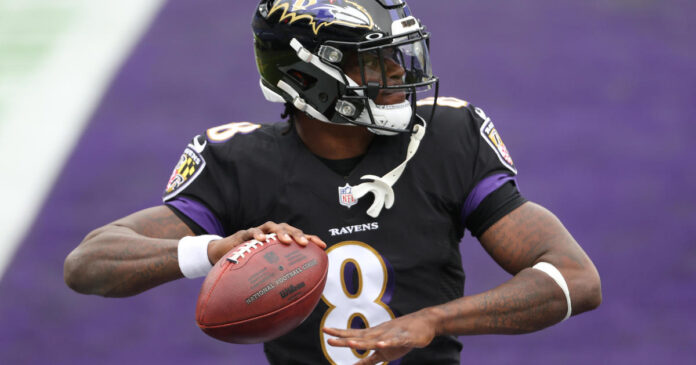 The Thanksgiving Day game between the Baltimore Ravens and Pittsburgh Steelers has been pushed back again as more Ravens players were exposed to COVID-19, in what’s becoming one of the largest outbreaks in the NFL. The game was rescheduled for Tuesday after four more players, including quarterback Lamar Jackson, were placed on the team’s Reserve/COVID-19 list on Friday, the team announced.

Along with Jackson, fullback Patrick Ricard, defensive tackle Justin Madubuike and long snapper Morgan Cox were placed on the list on Friday. At least one person has tested positive for COVID-19 every day this week, and 12 players have been put on the no-play list since Monday, the team said.

Ricard tweeted on Friday that he tested positive for COVID-19, writing, “I’ll be using this time to rest/recover along w my teammates/staff who has been affected by this virus.”

Jackson, who last season became the second player in league history to be unanimously selected as NFL Most Valuable Player, will likely miss a game for the first time in his NFL career due to injury or illness. If the game against the Steelers does occur on Tuesday, there is not enough time for him to make it back onto the field after his positive test, per NFL rules.

Ravens head coach John Harbaugh said the team “has a plan in place” and “will be prepared to play the Steelers.”

“We thank everyone for their adaptability and look forward to the change of facing a very good football team at Heinz Field on Tuesday night,” he said.

The game was originally scheduled for Thanksgiving Day, but was pushed back for the first time to Sunday due to the Ravens’ coronavirus results.

The team’s week 13 game against the Dallas Cowboys will also be moved. The game is now slated for December 7.

On Thursday, the team announced it had “disciplined” a staff member for their conduct surrounding the spread of COVID-19 among the team.

WNBA says sale of Atlanta Dream is “close to being finalized”