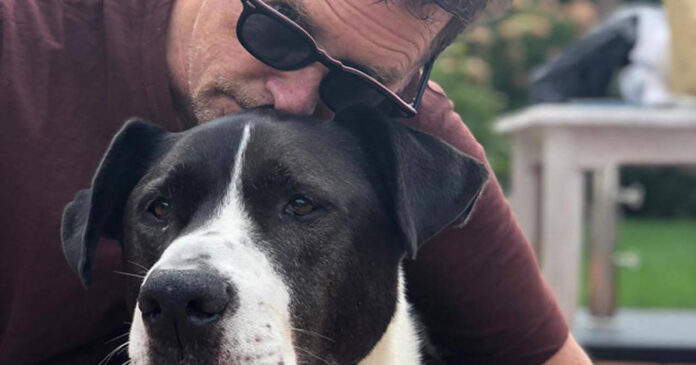 It’s been 35 years since a bolt of lightning sent Michael J Fox back to the future. Hill Valley’s clock never really recovered. The movie prop’s hands are still stuck at 10:04, but the clock’s been taken down from the perch that made it famous, at the courthouse square on the Universal Studios backlot, where correspondent Lee Cowan was conducting a virtual interview with Fox.

We thought it was a perfect place to chat with Fox, now 59, about the other jolt to his life – his beloved dog Gus, now 12. He’s pretty much a mutt – Great Dane- ish, Fox calls him.

Gus is featured prominently in Fox’s latest book, “No Time Like the Future: An Optimist Considers Mortality” (Flatiron Books).

“You know that no matter your situation, no matter what you feel, this animal is with you and is connected to you, and you feel, it’s a force multiplier,” Fox said.

Gus has been by Fox’s side almost half as long as Fox has been battling Parkinson’s disease.

Some days are better than others – this one was somewhere in-between.  “It’s very come-and-go, it’s not off, literally on and off,” said Fox.

“Yeah, and today I’m relatively on, but I’m too on, a little touch too much medication, because it’s different every day – you get what you get.”

What he got two years ago was a tumor that had to be removed in his spinal cord.  But when he returned home, in a wheelchair, Gus was waiting.

“I know with Gus he does, he knows there’s something different about me,” Fox replied. “And your instinct when you have a chronic illness is, sometimes, to isolate and make your world as small as possible so you don’t have as much to deal with. But a dog will open you up.”

He swears the reason people stop to talk to him during walks in Central Park is because of Gus, not because he’s Michael J Fox.

In the park you’ll find a bench with a plaque. It reads: “For Mike Fox and Gus. True New Yorkers.”  Fox’s wife, Tracy Pollan, gave it to him for his birthday – a reminder that Gus is every bit as human as anyone else who sits on a bench.

Their walks together mean more than most of us will ever really know, especially as Fox’s walking gets harder.

But he’s not focused on the future; he’s learned to be in the moment, moments like this one – where the restorative power of a slobbery kiss says it all.

WNBA says sale of Atlanta Dream is “close to being finalized”