Home Culture ‘I’m coming at him’ – Tyson squares up to Jones Jr ahead... 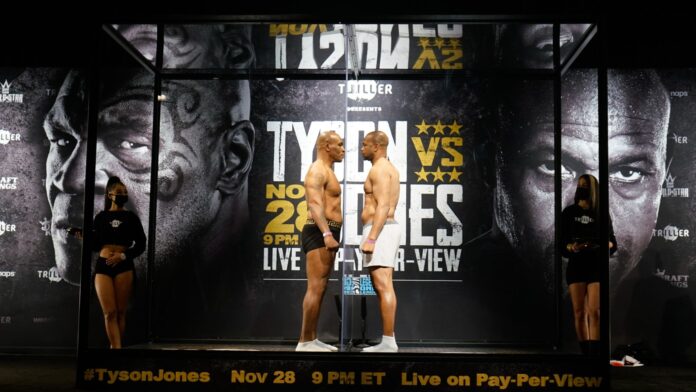 Boxing legends Mike Tyson and Roy Jones Jr have weighed in ahead of their bout on Saturday night, which will see no judges, a no-knockout rule, and no official winner.

The eight-round exhibition match will take place at the Staples Centre in Los Angeles as part of a three hour pay-per-view live broadcast, and sees both men back in the ring after extended periods of time away.

Despite facing a barrage of criticism since the announcement of the bout, it has reportedly drawn in record pre-fight sales.

Tyson, a former heavyweight champion of the world, last fought in 2005 when he lost to Kevin McBride – raising eyebrows about his ability to get back in the ring – while Jones Jr, who once held seven belts simultaneously, was still fighting in 2018.

The fight itself will be solely for entertainment purposes. With judges (and fans) absent from the arena, it means the match will have a “no-knockout” rule and will not record an official winner.

However, the rule that the fighters cannot knock out their opponent does not seem to have got through to Tyson, who says he is “coming at” Jones Jr.

He told reporters in LA: “I’m pitching punches and everything else is up to Roy. I’m coming at him. He doesn’t have to worry about me. If I’m running anywhere I’m running right at him.

It is not only Tyson and Jones Jr on the bill for the event, which is being run by social media platform Triller, with 23-year-old YouTube star Jake Paul taking on former NBA player Nate Robinson, 36.

The pair, as well as two others, will fight on the undercard in a six-round bout.