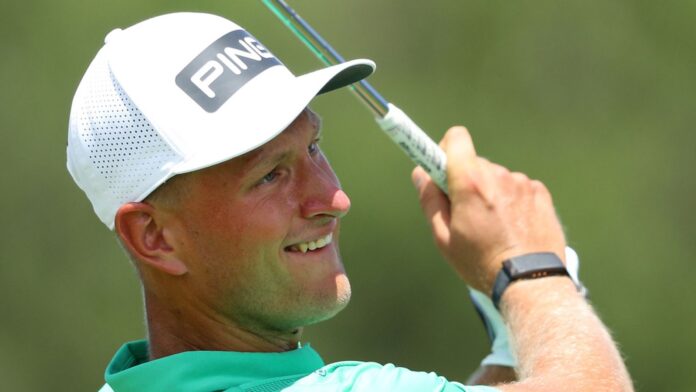 Adrian Meronk leads the Alfred Dunhill Championship after posting a one-under 71 at Leopard Creek, with Meronk chasing a maiden European Tour victory – watch the final round live on Sunday from 7am on Sky Sports Golf

Adrian Meronk recovered from a slow start to hold onto a one-shot advantage heading into the final round of the Alfred Dunhill Championship.

The world No 261, looking to become the first Polish winner on the European Tour, bounced back from two bogeys in his first four holes to post a one-under 71 at Leopard Creek Country Club.

Meronk’s closest challenge comes from South Africa’s Jayden Schaper, who closed out a second successive 67 with back-to-back birdies to get to 13 under, with Christiaan Bezuidenhout – the highest-ranked player in the field – three strokes back in third spot.

Sean Crocker and Adri Arnaus are four off the pace on 10 under, while last week’s Joburg Open winner Joachim B Hansen slipped five behind despite leading for several holes during the third round.

Meronk took a three-shot advantage into the weekend but saw that lead disappear in the space of three holes after bogeying the third, as playing partner Hansen opened with back-to-back birdies.

Hansen grabbed the outright lead when Meronk bogeyed the fourth and temporarily went two ahead with a tap-in birdie at the sixth, only for the Dane to fail to get up and down from off the green to save par at the eighth.

Meronk started his back-nine with successive birdies and retained top spot when Hansen racked up a quadruple-bogey at the 11th after finding the trees and then three-putting, before holing from close range at the par-five 13th to get to 14 under.

Bezuidenhout birdied five of his last eight holes to move within three of the lead and Schaper made a late charge by following an eagle-three at the 15th with two closing birdies, as Meronk closed out his round with five straight pars to retain a narrow lead.

Hansen also parred his way home to sit on nine under alongside Scotland’s Calum Hill, who birdied three of his last four holes, with England’s Richard Bland a further shot back with Julian Suri.