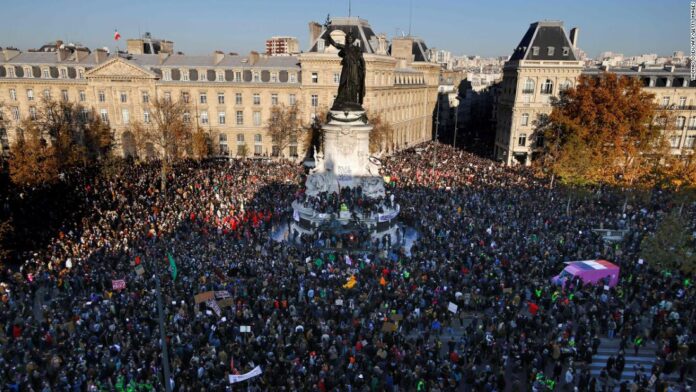 A protest in the French capital went ahead after a court overturned a police ban. Arie Alimi, a lawyer representing a collective opposed to the law, called on Twitter for a march between Place de la Republique and Place de la Bastille, two central squares known for protests.
The collective, called “Stop Loi Sécurité Globale” or Stop Global Security Law, is composed of journalists’ unions, human rights NGOs and other groups. They are advocating for the withdrawal of articles 21 and 22 of the proposed law, “which organize mass surveillance,” and article 24, which would penalize the “malicious” dissemination of the image of police officers.
They also call for the suppression of the so-called “New National Policing Scheme,” announced in September by Minister of Interior Gerald Darmanin, which forces journalists to disperse during demonstrations when ordered to do so by the police, thus preventing them from covering the aftermath of protests, often stormy in recent years.
More than 100 local elected officials from the Paris region announced their participation in the protest via a public forum in the French weekly newspaper Le Journal du Dimanche.
The protests marked the end of a tense week that saw two major police violence cases just as the law was being reviewed by France’s lower chamber, the National Assembly.
The bill was amended by the government, lawmakers say, to ensure the freedom of the press and will head to the Senate in December.
Police cleared a migrant camp in central Paris on Monday, brutalizing in the process several journalists, including “Brut” reporter Remy Buisine. The images of the violence went viral on social media, raising scrutiny of the government’s plans to make those images illegal.
At a news conference on Wednesday, Darmanin, the French interior minister, was asked about the police response to the protests, and video of one journalist who claimed police threatened him with arrest despite his showing his press card.
“The journalist did not approach the police ahead of the protest — as some of his colleagues did — in order to be allowed to cover it,” said Darmanin.
Yet nothing in French law requires journalists to seek the permission of the police before covering a protest.
On Thursday night, online media site Loopsider published footage showing the beating of a Black music producer, Michel Zecler, in and outside his studio by several police officers.
The video has been watched over 13 million times on Twitter, with many public figures, including international soccer players Antoine Griezmann and Kylian Mbappe, calling out the police violence.
The Paris Police Prefecture said the French internal police investigation body was asked to investigate the incident. It added it had asked the general director of the National Police to suspend the police officers involved as a precaution. CNN was unable to immediately determine who was representing the suspended officers.
President Emmanuel Macron denounced “images that bring shame upon us,” while asking his government to “quickly make proposals” to “fight more effectively against all forms of discrimination.”
“If people cannot film anything in the streets when the police may sometimes have an illegal use of force, it’s a very worrying message to send,” Cecile Coudriou, president of Amnesty International France, told CNN.
“On one hand, citizens are asked to accept the possibility of being filmed under the pretext that they have nothing to fear if they have done nothing wrong. And at the same time the police refuse to be filmed, which is a right in every democracy in the world.”
Macron has made similar requests at least twice this year already, in January following violent clashes between the police and protesters against his government’s pension reform and in June, in the context of a global wave of protests following George Floyd’s death in the United States.