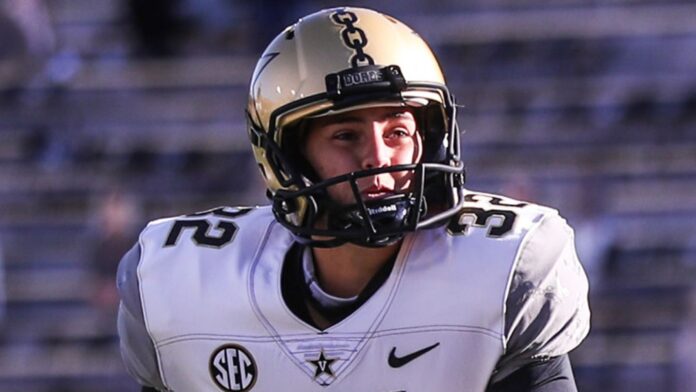 Sarah Fuller took on kicking duties for Commodores of Vanderbilt University in second half of game against Tigers of Missouri University on Saturday; 21-year-old is goalkeeper for Vanderbilt’s women’s soccer team

Vanderbilt University senior Sarah Fuller has become the first woman in college football history to play in a Power Five game after representing the Commodores against the Tigers of Missouri University on Saturday.

Fuller is usually a goalkeeper for Vanderbilt’s women’s soccer team and recently helped the side to win their first Southeastern Conference title since 1994.

But she was asked to help with kicking duties for the football team this weekend after a number of the side’s players were impacted by coronavirus, and made history by entering the field in the second half.

Following the game – which the Commodores lost 41-0 to fall to 0-7 for the season – Fuller told SEC Network: “Honestly, I was just really calm. The SEC championship was more stressful!

“But I was very excited to step out on the field and do my thing. I represent the little girls out there who wanted to do this or have thought about playing football or any sport, really.

“I just want to tell all the girls out there that you can do anything you set your mind to, you really can. If you have that mentality all the way through, you can do big things.”

Fuller wore the slogan ‘play like a girl’ on her helmet during the game in a nod to the non-profit organisation ‘I Play Like a Girl’, which helps girls gain access to educational and sporting opportunities.

“I just want to tell all the girls out there that you can do anything you set your mind to, you really can. And if you have that mentality all the way through, you can do big things.” – @SarahFuller_27 #AnchorDown pic.twitter.com/F8bZqeQaCG

The Missouri Tigers head coach, Eli Drinkwitz – who spoke to Fuller ahead of the match – said after his side’s victory: “Any time a barrier is broken, it should be commended.

“For her to have the courage to come out and be a part of a football team – that is going to be a barrier broken. That’s awesome.

“I shared with her that I have four daughters of my own and that made me very proud to be on the football field with her, and congratulate her and wish her the best.”