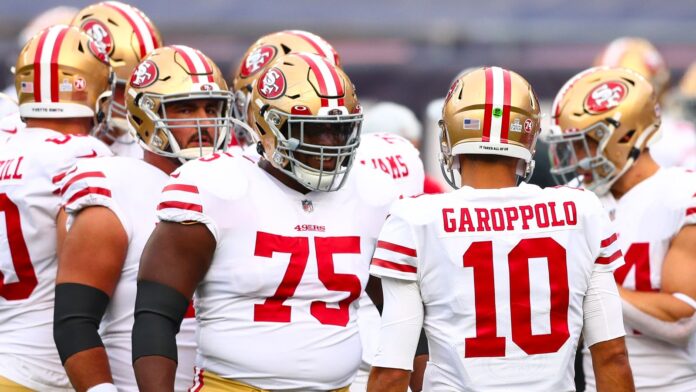 Santa Clara County has banned all games and practices in the area for the next three weeks; it means the San Francisco 49ers could be forced to find an alternative home; restrictions could also affect Stanford and San Jose State college teams and the NHL’s San Jose Sharks

The San Francisco 49ers are among the teams affected after Santa Clara County banned all contact sports from holding games and practices for the next three weeks.

Saturday’s announcement means the 49ers may have to temporarily vacate Levi’s Stadium and find an alternative home.

County officials issued the new regulations as a direct response to rising numbers of coronavirus cases in the area, with the rules taking effect from Monday, November 30.

The 49ers have home games scheduled for December 7 against the Buffalo Bills and December 13 against Washington.

The team also practises in the county but offered no immediate comment on the new rules.

The directives also have implications for other teams in the area, including the NHL’s San Jose Sharks and college teams at Stanford and San Jose State.

“For those teams, they will not be able to play games or have practices where they have direct contact, within the county,” Santa Clara County counsel James Williams said.

Williams also revealed he has contacted the teams affected, however, like the 49ers, none immediately responded to requests for comment.

While the NHL has not yet announced a date for the start of training camp, the Sharks have stated they would look into alternate sites if needed.

Currently the NHL is working towards starting the new season early in 2021, but there are more immediate concerns for college scheduling in that part of California.

Stanford have one scheduled home game left on December 12 against Oregon State.

San Jose State, meanwhile, have home games on December 5 against Hawaii and December 11 against Nevada.

NFL orders all team facilities to close on Monday and Tuesday

The NFL is closing all team facilities for in-person activities on Monday and Tuesday as it takes drastic steps to try to halt the impact of coronavirus on its already battered schedule.

The facility lockout, reported by NFL.com and ESPN, does not apply to teams scheduled to play on either Monday or Tuesday, and the Sunday slate is also unaffected.

Citing a spike in coronavirus cases across the nation, and the possibility of an influx of exposure resulting from the holiday weekend, the NFL is trying to stop more issues from arising. Both NFL.com and ESPN reported that the NFL is taking the step “understanding that a number of players and staff celebrated the Thanksgiving holiday with out-of-town guests” as a reason for the closure.

The Denver Broncos, Los Angeles Rams, Cincinnati Bengals and Arizona Cardinals were among the teams that saw a rise in coronavirus-related issues on Friday, according to NFL.com.

The NFL Players Association also told players to let teams know if they had guests in for the holiday for the purpose of additional testing when facilities re-open.