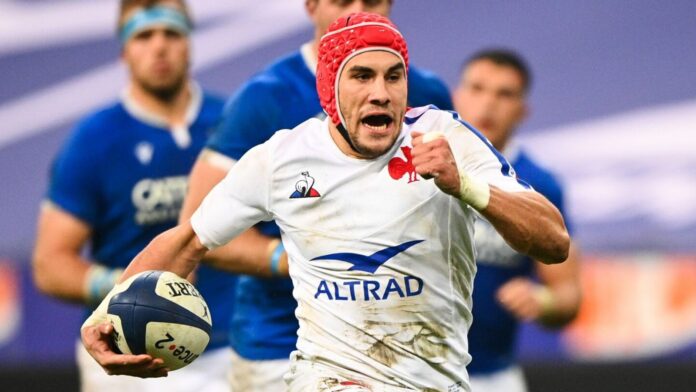 Hosts France were forced into making 13 changes to their side and fielded five debutants against Italy, but were comfortable winners; France now face England in next week’s Autumn Nations Cup final, while Italy are set to play Wales

France demonstrated their strength in depth as they cruised to a 36-5 victory over Italy to set up an Autumn Nations Cup final against England.

On the night they remembered Christophe Dominici, who died at the age of 48 this week, Les Bleus looked to a new generation as a side featuring 13 changes made light work of the Italians.

Following an agreement between the FFR and the domestic Top 14 league, coach Fabien Galthie had to make the changes and the same players will have to face England at Twickenham next Sunday.

The Italians took advantage of a disjointed start to grab the first try of the game through Carlo Canna, but once the hosts clicked into gear there was no stopping them.

After both teams stood for a minute’s silence in memory of former France winger Dominici, Matthieu Jalibert opened the scoring with an early penalty.

Canna burst through the defence in the 24th minute to put Italy into the lead, but his unconverted try proved the only points of the night for Franco Smith’s side at the Stade de France.

Jonathan Danty, one of five debutants in the French team, put the home side back in front before the break, though, after taking a pass from Baptiste Serin to score, with Jalibert’s conversion making it 10-5 at half-time.

Having led at the break, France stepped on the accelerator when play resumed and three tries in the space of nine minutes took the game beyond Italy.

Another of their debutants, Gabin Villiere, got the ball rolling when he ghosted through the defence to score in the 55th minute.

Serin then went from provider to scorer, followed by Teddy Thomas crossing just two minutes later to make certain of the hosts finishing top of Pool B.

There was still time for Sekou Macalou, making his first appearance for the national team for three years, to round off the scoring on the final play of the match.

While France have the final at Twickenham to look forward to, Italy are likely to face Wales in Llanelli next Saturday unless Georgia can score a bonus-point win over Ireland on Sunday and overturn a negative points difference.