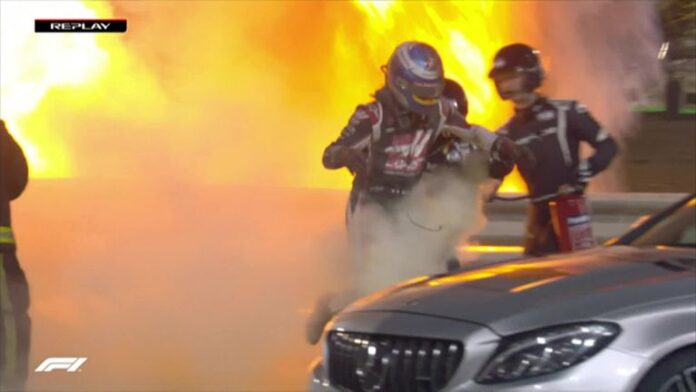 After Romain Grosjean walks away from fireball accident without serious injury, Lewis Hamilton says: “I think it shows an amazing job that Formula 1 and the FIA have done over time to be able to walk away from something like that.”

Lewis Hamilton spoke of the shock of seeing Romain Grosjean’s “horrifying” fiery accident in the Bahrain GP and said it acted as a reminder of the dangers in Formula 1.

Grosjean, the 34-year-old Haas driver, miraculously escaped an inferno when his car pierced the steel barriers and split in two in an accident on the first lap of the race, catching fire.

Incredibly, the Frenchman was able to clamber out of the wreckage before being attended to by awaiting medical crews and marshals.

He has suffered minor burns and suspected broken ribs and was airlifted to the Bahrain Defence Force hospital for further evaluations.

Hamilton won the race when it was restarted more than an hour later following barrier repairs and spoke afterwards about the accident.

“It was such a shocking image to see,” said Hamilton.

“When I get in the car I know that I’m taking risks and I respect the dangers that are in this sport. I posted about it [on Twitter] whilst we were in that break because it’s horrifying.

“But it’s a reminder to us and hopefully the people that are watching that this is a dangerous sport and that is why we are out there pushing to the limit and playing with that limit, but you also have to respect it.”

The FIA has said it will look into what happened in the crash to learn lessons for future.

“I think it shows an amazing job that Formula 1 and the FIA have done over time to be able to walk away from something like that,” added Hamilton.

“But that will be investigated and they’ll do a lot of work to make sure that doesn’t happen again.”

Max Verstappen: “When I saw the flames I was like, ‘oh my god, what happened there?’. We know when something like that happens it’s normally not a good thing, and he stayed in the car for like 15 seconds. The safety… incredible. And I think the Halo really saved his life today. Very happy of course that he jumped out of the car.”

Sebastian Vettel: “I haven’t looked at the images a lot as I didn’t want to, but the main thing is he got out. Obviously the guardrail is not supposed to fail like that, I mean it’s good the cars are safer than they used to be in the past but the guardrail shouldn’t fail and the car shouldn’t catch fire in that fashion. I don’t know what happened there. I think it’s difficult to say at this stage but the main thing is obviously that he got out.”

Pierre Gasly: “Honestly it was horrible. Initially I didn’t see what happened and when I saw the images I was shocked. From my generation I’ve never seen things like this in the past – I think in the past it was more common. It was really scary, and then when I saw Romain had got out, really I was happy. I was scared, I had no idea a Formula 1 car could brake that way and especially go through the barriers. The Halo seemed to be really working.”