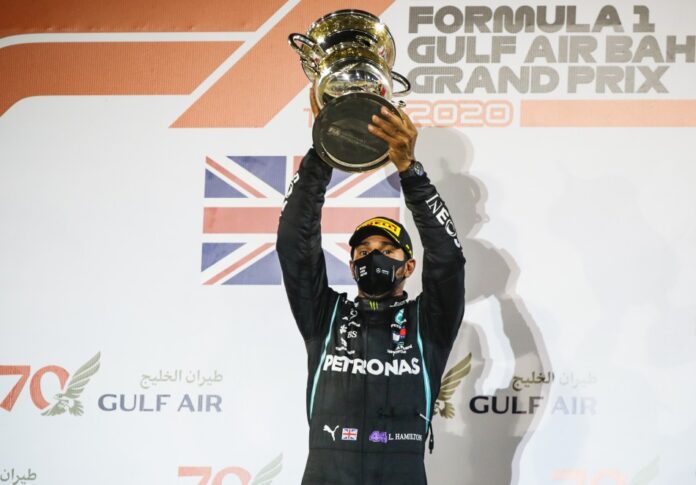 Mercedes’ Lewis Hamilton took his 11th win of 2020 ahead of Red Bulls’ Max Verstappen and Alex Albon in the FIA Formula 1 Bahrain Grand Prix, which was red flagged soon after the start due to a major crash involving involving Haas driver Romain Grosjean.

When the lights went out at the start, Lewis Hamilton made a good start from pole position to take the lead. Front-row starting team-mate Valtteri Bottas got away poorly, however, and that allowed Verstappen to take second place. Sergio Perez who went around the outside of Bottas to take third ahead of Albon.

Further back the field Racing Point’s Lance went wide on the right after to avoid tussling cars ahead, then one of the Alfa Romeos left the track on the left and rercating to the situation in front of him Grosjean moved swiftly across the track. He was unsighted however and hit the AlphaTauri of Daniiil Kvyat. The Haas went straight off track at high speed and through the Armco barrier. The car was torn in two and burst into flame. Miraculously, Grosjean was able to clamber out of the burning wreckage and was helped to safety by the FIA Medical Car crew of Dr Ian Roberts and Medical Car driver Alasn van der Merwe. The red flags were immediately displayed. Grosjean, who was said to have sustained only minor burns to his hands and ankles, was eventually flown to hospital for further checks and later posted video of himself safe in his hospital bed.

After an 80-minute delay to remove and replace the damaged barrier, the race began again but the second start was also incident-packed. Hamilton again got away well ahead of Verstappen and Pérez but behind them there was contact between Stroll and Kvyat, with the result that the Canadian driver’s car was flipped upside down.

Stroll was unhurt but the safety car was deployed and during the caution Bottas pitted due to a puncture caused by debris. The Finn’s misfortune moved Albon to P4 behind Pérez.

When the safety car left the track, Hamilton managed the re-start well to keep Verstappen at bay as Pérez also made sure to keep Alex at arm’s length. Behind them Leclerc tried to pass Ocon for P6 but the Frenchman defended well to fight off the Ferrari.

Hamilton was the first of the leading cars to make a regulation pit stop and the Mercedes driver moved to medium tyres. Albon pitted at the same time and made the same switch. Verstappen made his first stop a lap later and instead moved to hard tyres.

At half distance, Hamilton led Verstappen by 4.8 seconds, while Pérez was 16 seconds further back in P3, 3.7s ahead of Albon. The man on the move during this phase of the race was McLaren’s Carlos Sainz, with the Spaniard making his way past both Renaults to take P6 behind team-mate Lando Norris.

The Red Bulls were the first of the leaders to make final pit stops, with both Verstappen and Albon pitting at the end of lap 35. The Dutch driver’s stop was slow though and he lost ground to Hamilton who made his second stop on the following lap.

The race then settled again, and it looked like the order would stay the same until the chequered flag. With a sizeable gap back to Pérez, Verstappen opted to pit again in the closing stages and after taking on a set of medium tyres the Dutchman grabbed the fastest lap of the race and an extra point with a time of 1:32.014.

Behind him, it looked like Pérez was on his way to a second successive podium finish but with just a few laps to go the Mexican’s engine expired and Albon swept past to claim the second podium of his career. Behind the Thai racer, Lando Norris was fourth for McLaren ahead of team-mate Carlos Sainz, with AlphaTauri’s Pierre Gasly sixth ahead of Ricciardo, Bottas, Ocon and Leclerc.