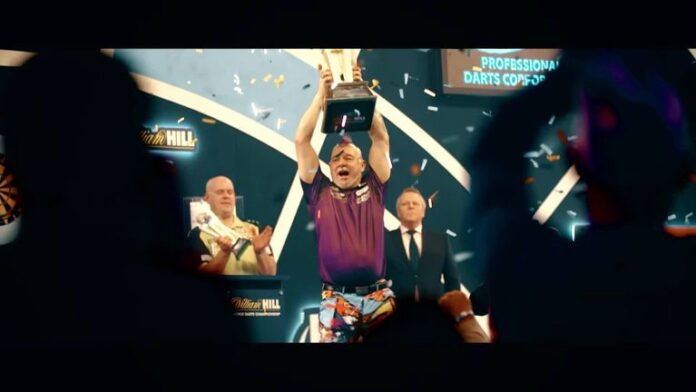 Sky Sports Darts channel will return on December 15 and bring you every dart from every session of the World Championship – the draw takes place on Thursday on Sky Sports News from 9.30am

It hasn’t been the best of seasons for the world No 1, who before the weekend had won just four titles in total and one televised crown – the UK Open in March – but he put that right with an impressive display to win the Players Championship Finals for a sixth time – averaging 102 for the event and pipping King in a dramatic finale.

Michael van Gerwen has become just the he second player in history, behind Phil Taylor, to win a televised event more than five times.

Van Gerwen stormed back from 8-6 down to beat Gerwyn Price 11-8 in the last four having averaged 110 in the quarter-final victory over fellow Dutchman Dirk van Duijvenbode.

Opponent King came from 7-2 down to beat Australia’s Damon Heta in the last eight before stunning world champion Peter Wright in the semi-final to earn a first televised final since the 2014 Masters.

Van Gerwen kicked off the final with a 96 finish only for King to take out 115 and 107 on his way to a 3-1 lead, but a three-leg burst took MvG back into the lead – a sensational 146 finish the highlight.

King capitalised on four Van Gerwen misses to square the final again, only for Van Gerwen to move 7-5 in front, two more 100+ finishes underlining the quality needed from the Dutchman to keep King at bay.

The pair traded huge finishes on the bullseye to stayed locked together at 9-9 before Van Gerwen moved within one of the title only to see King’s 13-darter set up a deciding leg where the Dutchman prevailed, but only after first missing three match darts.

“I’m proud of myself, I’ve worked hard for this, and to come back stronger and stronger like this means a lot to me.

“It’s been a long time since I won a tournament so I’m glad I played a very nice tournament. I played well and I’m glad to have my hands back on the trophy.

I’ve been out of form for a few months and you need to battle back. You have to fight back and I’m glad I did,”

Sunday’s final session at the Ricoh Arena in Coventry also saw the PDC World Youth Championship final go to a sudden-death leg, as 20-year-old Bradley Brooks defeated Joe Davis to win the title, the £10,000 top prize and a place at the World Darts Championship.

The four-day event also saw the regular season come to a conclusion, with the top 32 seeds set for the World Championship, which has been confirmed for Alexandra Palace and gets underway on Tuesday December 15.

Steve Beaton’s first-round exit on Thursday means he will not be seeded and as he prepares to set a new record of 30 consecutive appearances at World Championships he will enter at the first round stage.

The Worlds are coming…..

The PDC World Darts Championship is on after the news on Monday that Alexandra Palace would host the event, and that the PDC has begun talks with the venue with the hope of fans being able to attend, in line with the latest UK government advice.

With the seeds now set, the 96-player field will be confirmed on Monday after the final two Tour Card holders qualifiers – one for the Rest of the Worlds which will offer two places and the other for the UK players that will offer four places.

The draw will take place on Sky Sports News on Thursday December 3.