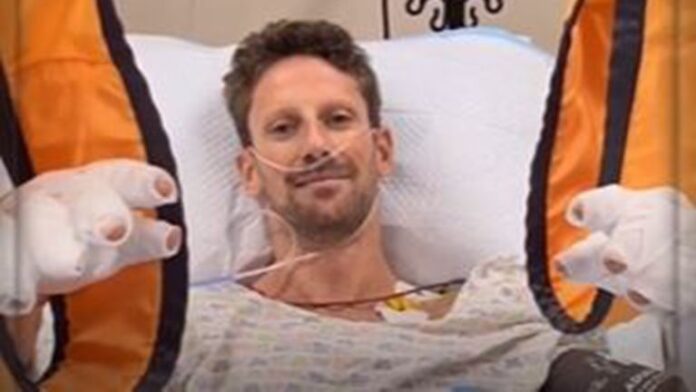 Back and front pages from around Europe after Romain Grosjean’s horrific accident at the Bahrain GP; Grosjean is recovering in hospital with discharge expected on Tuesday – but will be replaced at this weekend’s Sakhir GP

Romain Grosjean walked away from one of Formula 1’s most horrifying accidents in decades at the Bahrain GP, and Monday’s papers – from around Europe – have documented the “miracle” and how the Frenchman survived.

L’Equipe, the French newspaper (above, left), stated that Grosjean had “28 seconds to live” – referring to the time it took the Haas driver to escape both from his car, and back over the barriers following his terrifying crash.

“Victim of a spectacular and violent accident, Romain Grosjean spent endless seconds in the flames before getting out of his car and being rescued,” the back page continues. “The French pilot suffered from burns to his hands. Miraculous.”

Belgian publication Sportwereld (above, right) simply ask: “How do you survive this?”

Grosjean’s crash and escape was also featured on back pages in Germany and Italy. German newspaper Express say Grosjean was ‘rescued from the fire of hell’, while Corriere dello Sport in Italy described it as a ‘terror’.

The Daily Telegraph in the UK lead on Grosjean admitting that the Halo saved his life, while the Daily Star focus on the incredible picture with the headline: “Miracle”.

And the frightening accident was also front-page news in the UK.

The latest on Romain Grosjean

Brazilian driver Pietro Fittipaldi will race in place of the injured Romain Grosjean for Haas in this weekend’s Sakhir Grand Prix following the Frenchman’s fiery accident in Sunday’s race in Bahrain.

Grosjean is being treated for burns to his hands in hospital, although escaped more serious injury when his Haas car caught fire and split in two in a horrifying accident on the race’s opening lap.

Haas said on Monday the treatment was “going well” and expected the Frenchman to be discharged on Tuesday.

Grosjean spent Sunday night in hospital as doctors continued to treat burns to the back of his hands.

Appearing in good spirits as he posted an Instagram video from his hospital bed, the Frenchman thanked medical teams at both the circuit and the hospital – and credited the Halo head protection device, introduced to F1 in 2018, for allowing him to walk away from the accident.

“Hello everyone, just wanted to say I am okay… sort of okay,” he said, as he waved hands heavily wrapped in bandages.

“Thank you very much for all the messages.”

“I wasn’t for the Halo some years ago but I think it’s the greatest thing we brought for Formula 1, and without it I wouldn’t be able to speak to you today.

“Thanks to all the medical staff at the circuit and at the hospital and hopefully I can write to you quite soon some messages and tell you how it’s going.”