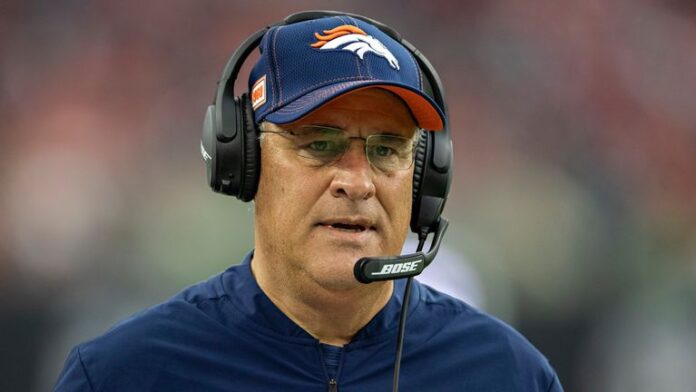 Kendall Hinton, a practice squad wide receiver, threw one of nine for 13 yards and two interceptions as a make-shift quarterback for the Denver Broncos in their defeat to the New Orleans Saints

Head coach Vic Fangio has criticised his Denver Broncos quarterbacks after their violation of coronavirus protocols left the team without a recognised play-caller under center in Sunday’s defeat to the New Orleans Saints.

Starting quarterback Drew Lock and backups Brett Rypien and Blake Bortles were all ruled out having been close contacts to Jeff Driskel, who had tested positive for COVID-19.

The Broncos were left to roll with practice squad wide receiver Kendall Hinton, who played as a quarterback briefly during his time at Wake Forest, while also lining up in the wildcat formation with running backs Phillip Lindsay and Royce Freeman.

“We count on them to be the leaders of the team and leaders of the offence and those guys made a mistake and that is disappointing. Obviously, I haven’t done a good enough job of selling the protocols to them, when they’re on their own.

“So part of that could fall on me that I thought that we have emphasised it a lot. We’re really doing good with Covid up to this point, as it relates to our team relative to other teams. But there was a failing there, and that’s disappointing.”

Besides unsuccessfully requesting that the game be pushed back in order for their quarterbacks to return, the Broncos had also reportedly asked the NFL if they could start offensive quality control coach Rob Calabrese under center.

That bid was evidently denied, with Hinton stepping in and finishing the game one of nine for 13 yards and two interceptions as the Broncos were beaten 31-3 to fall to 4-7 on the year.

“Well, he did everything he could,” added Fangio. “He was excited for the opportunity. We had about a two, three, four hour window there to get them wet, ready, which isn’t a lot obviously.

Hinton was signed by the Broncos as an undrafted free agent in April this year, before being waived in September and then joining back up with the practice squad earlier this month.

“I would not say this is how I planned it out in my dreams, but it usually doesn’t work out how you want it,” Hinton said, via the team’s website.