Home Sport Pressure on but Roy has ‘credit in the bank’ 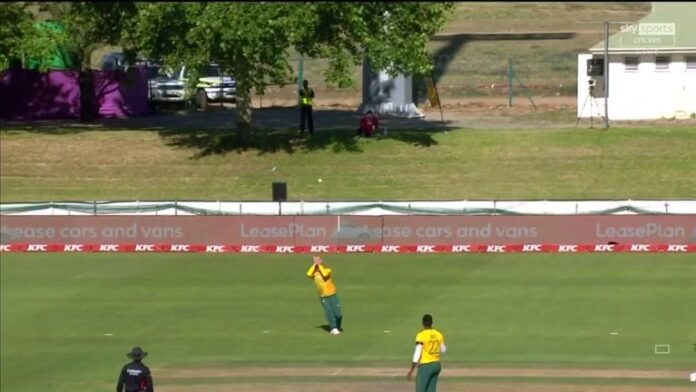 Jason Roy is short of runs and under pressure with England having ample opening options – but his recent white-ball successes should not be forgotten; watch final T20 against South Africa live on Sky Sports Cricket from 3.30pm on Tuesday

Roy was just about to head out to open the batting for England, looking to end a barren run of white-ball form for his country which had seen him manage only 56 runs in his previous eight ODI or T20I innings and face only 85 balls in international cricket since March.

Twenty minutes later the story was still Jason Roy – and not in the way he would have liked, having been dismissed for a skittish 14 from 19 balls.

The batsman nailed a sweep shot for four and absolutely crunched Lungi Ngidi through the covers for a boundary that smacked of him at his best.

However, he came ever so close to snicking South Africa spinner George Linde behind first ball – which would have earned him successive ducks.

He then ballooned just short of cover and overturned an lbw dismissal before hacking to Heinrich Klaasen in the off-side at the end of the fourth over to conclude a frantic knock.

Roy looked like a man searching for, and struggling to find, form – so far from the destructive bowler’s nightmare he had been during the 2019 World Cup.

Sky Sports Cricket experts Nasser Hussain and Michael Atherton both feel that is down to a lack of cricket.

A side strain meant Roy only played six of England’s 12 white-ball matches across the home summer, while he then opted out of an IPL stint with Delhi Capitals this autumn – a decision that may have backfired.

“Eoin Morgan is the sort of cricketer that can have three months off and come and smash it but if Roy has time off he loses the rhythm of batting, which he needs,” Hussain said of Roy, who had gone the best part of seven weeks without a competitive hit between the Vitality Blast final for Surrey on October 4 and England’s first warm-up game in South Africa on November 21.

Hussain’s fellow former England captain Atherton added: “I think the real issue is the lack of cricket he has had. He is a player who needs time at the crease. When he doesn’t have it, that accentuates a slight lack of confidence with regards to being aggressive against spin.”

Playing against spin has become another of Roy’s issues, with the stats revealing that he averages below 21 against all types of spin bowling in all T20s he has played since January 2018, with left-armer Linde the latest to give him some concerns. Not ideal with the next T20 World Cup taking place in India in a little under a year’s time.

However, as Hussain said on Sunday, Roy has “a huge amount of credit in the bank” due to the role he has played in England’s dramatic white-ball turnaround since the debacle of the 2015 World Cup.

This is a man with England’s highest-ever individual score in one-day international cricket, a sparkling 180 against Australia at The MCG in January 2018, and nine ODI centuries to his name.

This is a man who hit two tons in the 5-0 ODI razing of Australia in 2018 and two in the 3-0 success at home to Sri Lanka two years previous.

This is a man who averaged 72 in ODI cricket in that glorious 2019 summer which culminated in England winning their first 50-over World Cup, including 153 in the group game against Bangladesh in Cardiff.

England’s hopes of making the knockout stages were in huge peril as, in Roy’s absence due to a hamstring injury, they lost back-to-back matches to Sri Lanka and Australia and also, in truth, lost some of the fear factor Roy gave opposition bowlers.

With England in must-win territory, the fit-again Roy returned against India at Edgbaston and promptly hit 66 against Virat Kohli’s men and then 60 against New Zealand as the hosts secured a spot in the semi-finals.

The best was yet to come for Roy, though, who trampled Australia in the last four with a 66-ball 85 as England cantered to their target of 224 with almost 18 overs to spare.

This is also a man whose half-century against New Zealand in the 2016 World T20 took England into the final of a tournament in which he averaged over 30.

See, credit in the bank.

Unfortunately for Roy, opening batsmen in white-ball cricket is not something England are short of. Not by a long stretch.

Of the top seven deployed in the first two T20 internationals against South Africa all but one of them – Eoin Morgan – has opened the batting for some team or another over recent months in the shortest form of the game.

Looking further afield, England have the likes of Tom Banton, Phil Salt, Ben Duckett and Liam Livingstone and looking even further afield they have Alex Hales, who remains a brilliant white-ball player but is still out of favour after his pre-World Cup indiscretions.

England could draft in someone from the outside, like a Banton, for Roy, though if he were to be dropped – and there is no evidence that is imminent – a more likely scenario might be for Bairstow to open with Buttler and for an extra bowling option to come in, which might be handy if Stokes is only going to be an occasional bowler in T20 cricket.

We know that Morgan and England are loyal to their players but they can also be ruthless – David Willey found that out when Jofra Archer replaced him in their World Cup squad late on, while Liam Plunkett has not played for his country since taking three wickets in the World Cup final with England since opting for younger quicks.

Roy’s credit in the bank takes him a long way but he knows he needs to cash in.

Watch the third and final T20 international between South Africa and England live on Sky Sports Cricket from 3.30pm on Tuesday.