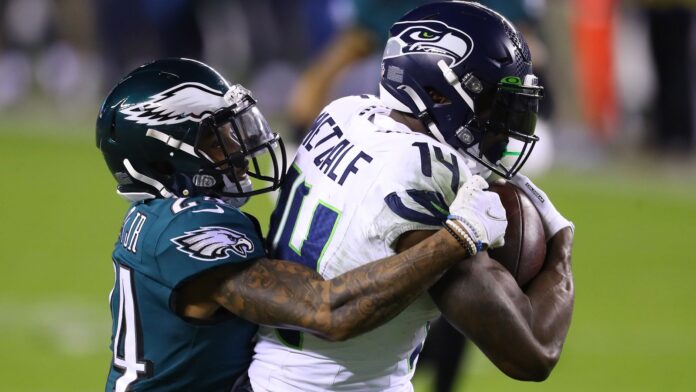 The Eagles’ offence goes three-and-out on each of their first five possessions against the Seahawks’ league-worst defence, gaining a total of four yards; Carson Wentz goes 25 of 45 for 215 passing yards, two touchdowns and one interception

D.K. Metcalf had 10 catches for 177 yards, and recovered a late onside kick, as the Seattle Seahawks defeated the Philadelphia Eagles 23-17 on Monday night.

The Seahawks (8-3) moved a game ahead of the Los Angeles Rams in the NFC West, while the Eagles (3-7-1) are third in the NFC East, but still only one win behind the table-topping New York Giants (4-7).

Seattle’s Russell Wilson completed 22 of 31 passes for 230 yards and a touchdown – a one-yarder to David Moore to open the scoring after both teams drew a blank in the first quarter. That score was set up by a 52-yard completion to Metcalf on third-and-13 from the Seahawks’ 47-yard line.

Seattle had turned the ball over on downs in Eagles territory on both of their first two possessions, including on fourth-and-goal on their opening drive.

But, following Moore’s TD, Chris Carson doubled their lead with an angry 16-yard touchdown run in his first game back from a foot injury that sidelined him for four weeks.

The Eagles offence, by comparison, started woefully, going three-and-out on each of their first five possessions against the Seahawks’ league-worst defence, gaining a total of four yards.

Philadelphia finally got going on the final drive of the first half, moving 70 yards in 15 plays, with much-maligned quarterback Carson Wentz finding tight end Dallas Goedert for a three-yard TD with 12 seconds left. A failed extra point attempt meant the hosts trailed Seattle 14-6 at the break.

Wentz was 25 of 45 for 215 yards, two touchdowns and one interception in the game as a whole, also rushing for a game-high 42 yards.

Wentz’s interception came with eight minutes and 40 seconds remaining in the fourth quarter when, trailing 20-9, Eagles head coach Doug Pederson decided to go for it on fourth-and-4 at from the Seattle 15-yard line.

The two teams had traded field goals in the third – a 42-yarder by Philadelphia’s Jake Elliott and a 44-yarder by Jason Myers for Seattle. Myers added further 33-yard and 39-yard efforts in the fourth to see the Seahawks stretch ahead 23-9.

Wentz completed a tipped Hail Mary pass to Richard Rodgers for a 33-yard touchdown with 12 seconds left on the clock, they were successful with the subsequent two-point conversion, but Metcalf then fell on the onside kick to clinch victory for Seattle.