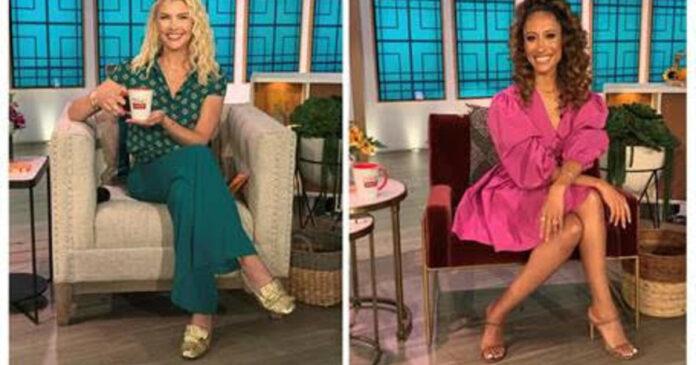 Two new hosts will join “The Talk” in January and they are both familiar faces on the CBS talk show. Amanda Kloots and Elaine Welteroth will join season 11 of the show, alongside hosts Sharon Osbourne, Sheryl Underwood and Carrie Ann Inaba.

Both Kloots and Welteroth have been guest co-hosts on the Emmy-winning show this year. The women will replace co-hosts Marie Osmond and Eve.

Kloots, a former Broadway dancer who lost her husband, Nick Cordero, to COVID-19 earlier this year, said she is “thrilled and honored” to join “The Talk.”

“From the very first time I guest co-hosted on THE TALK, I knew I was among a very special group of people,” she said in a statement. “I look forward to starting off the new year with honest and thought-provoking discussions, mixed with plenty of fun and laughter too.”

Kloots chronicled her husband’s battle with COVID-19 on Instagram earlier this year, giving fans a glimpse into the harrowing journey. Cordero, a Tony Award-nominated actor, died in July. Kloots continued to use social media to raise awareness about COVID-19 prevention.

She recently slammed President Trump for tweeting in October that Americans shouldn’t be afraid of COVID-19 or let it dominate their lives — as he left the hospital after receiving COVID-19 treatment.

Kloots also uses her social media to share glimpses into her family life and often posts about her son, Elvis, who she shared with Cordero. She is a former Radio City Rockette who created her own fitness brand AK! Fitness and apparel company Hooray For.

Author Elaine Welteroth said she was “beyond excited and grateful to join the women of ‘The Talk.'”

“They have each made me feel right at home alongside them on this incredible platform that cultivates connection, kindness and understanding when we all need it most,” she said in a statement. “I look forward to learning from them and lending my perspective to conversations that build bridges in this singular time in our world.”

Welteroth’s book “More Than Enough: Claiming Space for Who You Are No Matter What They Say” became a New York Times bestseller in 2019.

The award-winning journalist has tried her hand at television before. She has written for the sitcom “Grown-ish” and has appeared on-camera for several projects, according to her website.

Welteroth has served as a judge on the new Project Runway and previously led Teen Vogue — the youngest editor-in-chief at a Condé Nast publication. She was also the second African American person to hold the title of editor-in-chief at the company. She previously worked at Glamour and Ebony Magazine.

She currently serves as cultural ambassador for Michelle Obama’s When We All Vote initiative.

“The Talk” has earned 11 Daytime Emmy Awards and 51 nominations as well as the People’s Choice Award or Daytime TV Hosting Team and the NAACP Image Award for Outstanding Talk Series, both in 2016. The new season is set to air on CBS on Monday, January 4, 2021.