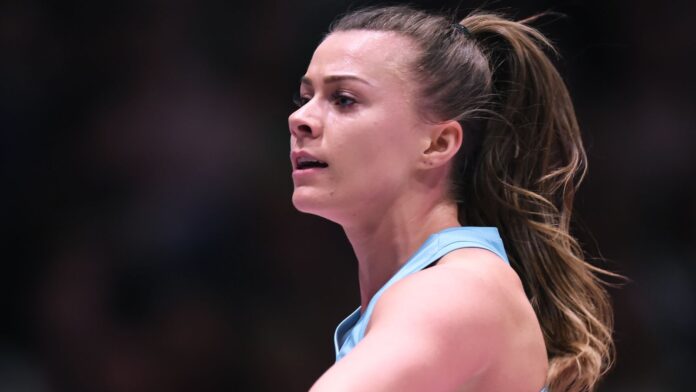 “The team that comes out of this situation the strongest will be the one that has embraced every part of it.” Director of netball Mikki Austin has acknowledged the importance of adaptability as pre-season continues for Surrey Storm.

“The team that comes out of this situation the strongest will be the one that has embraced every part of it.”

Mikki Austin has urged the importance of adaptability to her Surrey Storm squad as they turn their focus on a new season of elite netball.

The 27-year-old, who originally signed for Storm as a player in 2015, has been juggling the roles of director of netball and head coach alongside playing, since August 2018.

Needless to say, the last 12 months have been the strangest of her sporting career and have featured Austin having to deal with the longest period away from the game since she was a young girl.

However, in November and early December, a semblance of normality returned as Surrey Storm and all Vitality Netball Superleague franchises were able to continue training during England’s second lockdown period.

“It’s probably the only time that actions have backed up the words that netball is elite and professional,” Austin said. “We’ve all said to each other that this is what it must feel like for other sports all of the time!”

With the 2020 season being postponed and then cancelled, the early off-season period meant that Austin had to quickly gain a picture of her athletes’ wishes in order to plan her recruitment and squad during the course of the 2021 season.

Her proactivity meant that she gained a “really good idea” as to who wanted to stay, and prior succession planning came to the fore as Katy Hughes and Lorraine Kowalewska made their retirements known.

“With the retirements, they were something that we’d been aware of and been planning for, over the last two years or so.

“I understand they came as a shock to everyone else, but not to us. It’s why we added Leah Middleton to the squad last year, as well as boosting from within.”

In case you need reminding – here’s what to expect from the amazing Felisitus! 😍#StormRises 💙 https://t.co/scI2vwyOCE

Alongside the returning Middleton, Felisitus Kwangwa is a player poised to make waves in Storm’s defensive end in 2021.

Kwangwa is one of just a couple of athletes in the 15-player squad who are completely new to Storm. The majority have either re-signed or come through the franchise’s NPL pathway at some point.

“There’s definitely a sense within Storm of players coming back home,” Austin said.

“As staff, we were chatting amongst ourselves during the Roses’ tour of New Zealand and talking about how many of those athletes came through the Storm pathway. It’s only because they had to leave to go to university that we weren’t able to retain them.

“As we don’t necessarily have one of your university performance pathways, like a Loughborough or a Bath, people tend to forget that we nurture players all the way through their NPL careers.”

From the first day she stepped into the director of netball and head coach roles, Austin has been clear that if athletes want to be part of her squad, then it’s about more than just their skills on court.

“The type of people and the group of women that we have in our group is really important. As I look to next season, I’m really happy with where we’re at and with the personality types that we’ve got.

“We’ve got a balance of athletes who have been in and around the game for a long time, and who are clear about how they play and their styles. Alongside them, we have a crop of athletes who are fresh and have the ‘no-fear’ factor. I’m really looking forward to getting stuck in.”

How good- to those successful, welcome to the family! Especially in the current climate, I’m Incredibly proud of all the hard work completed to get this off the ground, and the continuous grind to keep being flexible 💙 https://t.co/wus32zZJd7

For Austin, her squad and every person involved with the Vitality Netball Superleague, 2020 has been a very different year and one that continues to require a tremendous level of adaptability.

With the talent that has been recruited across the board, as well as key returnees and promoted youngsters, Austin is confident England’s elite competition will return stronger than ever.

“It seems like every year, we say that the next Superleague season is going to be the most exciting and I think that’s a testament to everyone building the league as a product.

“In 2021, I really do think we’ll have the most exciting and diverse league that we’ve had thus far. Every team has recruited well and sustained their playing groups.

“A lot of teams are eager to build upon what they started earlier this year, which is a really good place to be, and a lot of teams have added a couple of exciting players.”

At this point, it’s a wide-open playing field and to me, it’s very much going to be about: the teams who deal with the off-court challenges the best, will win.

Having been able to come back together and train as a group, the 27-year-old and her team-mates have been acutely aware of the privileged position they’ve been in.

“I’ve said to our players and they also say it often, we’re so lucky to get the chance to do what we do, especially in recent months whilst the country was in its second lockdown.

“We’re a tiny percentage of the population who normally play netball and we’re so conscious of the amount of women and girls who would have bitten our arms off to have been able to continue to play.

“So, no matter how stressful or unideal it is, we cannot lose sight of how fortunate we’ve been. That will be the overriding factor, win, lose draw or otherwise.

“The team that comes out of this situation the strongest will be the one that has embraced every part of it.

“What sport is being played in ideal circumstances right now? There aren’t any.

“Everyone’s playing under really strange and weird circumstances. Now, and as we move forwards towards next season, we’ve just got to find a way to embrace it, realise how fortunate we are and make the best of a strange situation.”