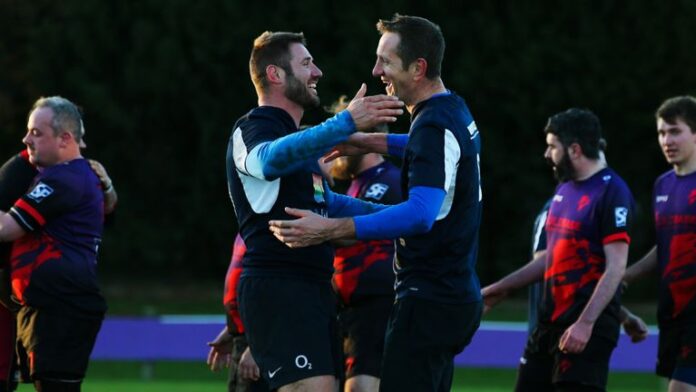 It’s one of the most memorable Rainbow Laces moments ever – Will Greenwood and Ben Cohen going back to grassroots rugby to team up with two LGBT+-inclusive clubs. The England legends and Bristol Bisons’ Lee Penfold reflect on a match with a message

When the players of Bristol Bisons and fellow inclusive rugby club Northampton Outlaws arrived for a scheduled league match three years ago, they were stunned to discover two World Cup winners waiting to greet them.

The Rainbow Laces game at Clifton Rugby Club, organised by Sky Sports‘ fellow TeamPride partners Aviva, has gone down as one of the most memorable moments in the campaign’s history.

Will Greenwood and Ben Cohen, with over 100 international caps for England between them, took their elite experience into a spirited, closely-fought contest at the grassroots of the game that saw the Bisons and Outlaws play out a 29-29 draw, with Nigel Owens overseeing matters as the man in the middle.

Sky Sports caught up with Greenwood and Cohen to get their recollections of the game and also their thoughts on Rainbow Laces, as the campaign returns for its annual activation – but first, we asked one of the Bisons players to explain what made that match in November 2017 so special, and the legacy it left…

‘Being a Bison has given me so much’

Lee Penfold played at fly-half for the Bristol Bisons, who he joined 10 years ago. He is now their longest-serving player.

Myself and Josh, our chairman at the time, were the only people in the club that knew we were going to be playing with Will and Ben. Obviously, we’re massive rugby fans so we were both really excited – we told everybody else to just come down to Clifton, expect a surprise or two, and enjoy the day.

However, even we didn’t know that Nigel Owens would be refereeing so that was a shock! With his profile at the time being the World Cup final referee and with him being an out gay man, it was a privilege to have somebody at the highest point of their professional career supporting what would be one of the lowest-level games out there.

I was just so proud to be a part of something big that promoted inclusivity in sport and was a showcase for clubs like ours. The Bisons have been going for 15 years – we’ve got a lot of people that had never had much confidence in playing sport before. For that to be recognised in such a way, with these famous faces coming along, was just fantastic.

I joined up and met other people that like rugby but are also LGBT. I’ve made loads of great friends and I haven’t looked back since.

Will and Ben did some coaching beforehand too which was a great experience. I remember Will referred to me as ‘a kind of an Andy Goode character’ because I’m a big player for my position! It was all good fun and actually, it did spur me on to get a bit of fitness up, so maybe I should thank him…

Being a Bison has given me so much. I didn’t really have any problems in school and I was quite sporty. But of course, I wasn’t out – I kept that all quiet to myself. There were a lot of people at school that were put off sport because they didn’t fit in for whatever reason – and I could see that.

I came out when I was about 25. I didn’t really know any gay people, and I certainly didn’t have any gay friends. Then I found out about the Bisons. I’d finished university a couple of years before and I’d had a few years off playing sport. The club gave me an outlet to get back into the game. I joined up and met other people that like rugby but are also LGBT. I’ve made loads of great friends and I haven’t looked back since.

Rainbow Laces is important because it sends out a message around the world that sport is for everyone, no matter where you’re from, what your background is, or anything like that. It raises awareness around inclusion and helps to get more people involved with sport.

I’m a big Bristol Bears fan and every year they do something with the campaign. Usually, at this time, we’d go down and watch them play and be a part of that but unfortunately, because of COVID, we can’t this year. But to see Rainbow Laces mentioned on TV and players supporting it can only mean that the awareness is going to grow, underlining that inclusivity in sport is needed.

It’s so great that Premiership Rugby, football and other sports give it their backing. We should all want to help make LGBT+ people feel more comfortable with who they are and if you can do that through sport, at all levels, through Rainbow Laces, it has achieved something considerable.

‘It’s so important for sport to be inclusive’

Will Greenwood was born in Blackburn and also played first-team cricket at school before concentrating on rugby. After university, he moved to London and joined Harlequins. An inside centre, he left in 1996 to sign for Leicester Tigers and made his England debut the following year. In 2000, he returned to Quins and was part of the England team that won the World Cup three years later. He is now a Sky Sports pundit.

That match at Clifton really was an amazing day. The excitement was there when the players arrived and met us but it lifted even more when Nigel ran out to referee. He’s an outstanding individual and someone who’s done so much for the LGBT+ community.

I’ve always advocated that there’s a place at a rugby club for absolutely everyone. It’s one of the great levellers – if you’re prepared to rock up with a gum shield and a pair of boots and have a crack, then a rugby place is somewhere you’ll always find friendship. I was delighted to support the game. I got overly competitive, and enjoyed it a lot!

The players weren’t expecting any of it. They walked into the changing room and got brand new kit from us – everyone loves a bit of stash – and the place went crazy when we introduced Nigel. It’s difficult to overestimate what a special day it was, and how much fun I had meeting some really great new people who had big smiles and were welcomed warmly.

An Andy Goode kind of player? Well, every team needs one of those! A player like Jan Molby at Liverpool, who owns the midfield, doesn’t do a lot of running but is like a traffic policeman, pointing everyone in the right direction. The banter is always friendly and warm and contextualised – that’s the absolute key to it.

It’s so important for sport to be inclusive. We grow up as kids and play sports with our mates with an innocence and a youthful exuberance. You’re running around and no one cares about colour, creed, religion or sexual orientation – it just doesn’t have any place in a young child’s heart.

But then through societal pressures, these labels appear, and they’re either mainstream or marginal. With that comes stigmatisation of who you are or what you’re supposed to represent. I think sport has the ability to throw that away and allow you to be eight years old again. That’s why I play sport – to shut my mind off from the rest of the world, whatever’s happening, whatever troubles might be taking place, and go back to being a boy running around on the pitches of North Lancashire. We should want to preserve the integrity of that innocence on a sports field and just allow people to play.

LGBT-inclusive clubs are psychologically safe places to be. We’ve got a great inclusive team at Maidenhead Rugby Club (the Berkshire Unicorns). We want to promote the fact that our rugby club is one that has opened doors to everyone.

‘Rainbow Laces is about more than just the laces’

Ben Cohen joined his local club Northampton at the age of 17 and went on to make nearly 150 appearances for the Saints. Mainly a winger, he made his England debut in 2000 and was alongside Greenwood in the team that beat Australia in the 2003 World Cup final in Sydney. After retiring from rugby, he set up The Ben Cohen StandUp Foundation to combat bullying and homophobia.

The match was a great initiative by Aviva and an amazing day for the players. But it also created a talking point – I think that’s ultimately what’s needed.

Will and I were eager to get our boots back on, although I felt it for a week afterwards. Nigel running out was a nice surprise – he’s world-class, there’s no doubt about it. It’s great for him to be there as an out referee – and he is without question judged on his talent. He’s a role model and it shows you can be out and proud and at the top of your sport.

Casual homophobia in sport can have implications on an individual. Education is needed and you can see now that’s becoming more understood. We still don’t get many people who come out at the top of their sport – hardly any, in fact. Perhaps they don’t feel that they’ll be accepted for who they are or that they won’t be judged on their talent. It’s especially true in men’s team sports and when they do come out, it’s usually at the end of their career. It’s sad that they don’t feel they can come out at the moment.

It’s important to highlight that clubs like the Bisons and the Outlaws aren’t just gay rugby clubs, they’re gay-friendly rugby clubs. A large number of players at these clubs are straight. It’s just about the LGBT community being respected and accepted, and they’re being receptive too – you’re there to enjoy the sport for what it is, especially at that kind of amateur level. People are taken at face value and everyone has a drink afterwards, which is how it should be.

Rainbow Laces is about more than just the laces. Yes, people can show their support by wearing them but you’ve got to have a campaign that leaves a legacy. It’s a fantastic initiative and to create a story like this shows that. Sport should be inclusive for everyone – you should be judged on your talent not your sexual orientation, the colour of your skin, or your sex or gender. It’s sad that you do get kids who get put off sport because it’s not inclusive and maybe they’ve been bullied and singled out. To have some visibility with the laces and to get people talking, it’s very important.

Sky Sports is a member of TeamPride which supports Stonewall’s Rainbow Laces campaign. If you’d like to help inspire others in sport by sharing your own story of being LGBT+ or an ally, please contact us here.