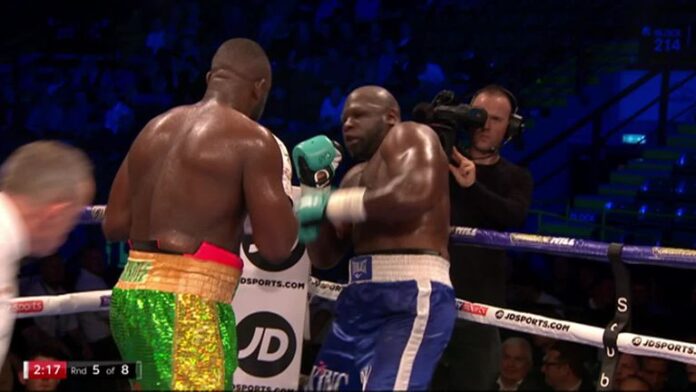 Martin Bakole to fight Sergey Kuzmin on the undercard to Anthony Joshua vs Kubrat Pulev on December 12, live on Sky Sports Box Office; “Beat anyone in Britain? Martin can beat anybody in the world on his day,” Billy Nelson said

Martin Bakole’s potential to be a world heavyweight champion has been recognised by Anthony Joshua and Peter Fury, says his trainer Billy Nelson.

Congo-born Scotland-based contender Bakole is aiming to make a statement against Sergey Kuzmin on the Joshua vs Kubrat Pulev undercard, live on Sky Sports Box Office, on December 12.

The respect he has commanded through sparring Joshua, Hughie Fury, Joe Joyce and Daniel Dubois has been noted by his trainer Nelson.

“AJ has told me that Martin will be a world champion,” Nelson told Sky Sports.

“So has [Joshua’s trainer] Rob McCracken and so has [Hughie Fury’s trainer] Peter Fury.

“Martin has looked brilliant in sparring.”

On why Bakole is regularly used by Joshua for preparation, Nelson said: “Martin is a very clever fighter who makes you think. McCracken thinks along the same lines as myself when it comes to sparring – as long as your brain is active, you don’t need to be throwing bombs.

“If two smart operators are sharing the ring they have to be on the ball all the time. That’s the case with Anthony and Martin.

“You can hear their brains ticking when they spar.”

How far can Bakole go?

The only defeat on his record came at the hands of Michael Hunter in 2018 but Bakole has since rebounded with four stoppages in a row, including against Mariusz Wach who went the distance with Dillian Whyte and Wladimir Klitschko.

“Before he fought Wach at three weeks’ notice, Martin only had two spars but went over to Poland and stopped him quicker than anyone had,” Nelson said.

“People have questioned Martin’s opponents since – but Rodney Hernandez went the distance with Michael Hunter and Adam Kownacki, but Martin destroyed him.

“And Ytalo Perea was a tough man who had never been stopped.”

World ranking on the horizon?

The WBC international title is on the line when Bakole fights Kuzmin, a Russian who has stopped David Price.

Claiming that belt will lead to a ranking with the WBC – Kuzmin is also currently No 14 with the WBA, a spot that Bakole could take for himself.

“Beat anyone in Britain? Martin can beat anybody in the world on his day,” Nelson said.

“If Martin is on his A-game, he really can beat anyone in the world.

“I am a great believer that the cream will rise to the top.

“Pressure? If Martin couldn’t handle pressure, he would get a 9-5 job.

Bakole has previously told Sky Sports about eventually challenging Joshua for the world heavyweight title: “It would be a big show, not only for Africa, but for the whole world. Imagine if Joshua fought in Nigeria or my home in Congo.”

Nelson added: “If Martin wins his fight, he can start talking about things like that, which he couldn’t in the position he was in 18 months ago.”

“Dillian Whyte is the one we’d like to fight,” Nelson said.

“I’ve suggested it a few times to [Whyte and Bakole’s promoter] Eddie Hearn. I suggested it when Alexander Povetkin pulled out of his fight with Whyte.

“Martin is technically better, punches harder and faster than Whyte.

“The only thing Whyte has over Martin is his experience.”