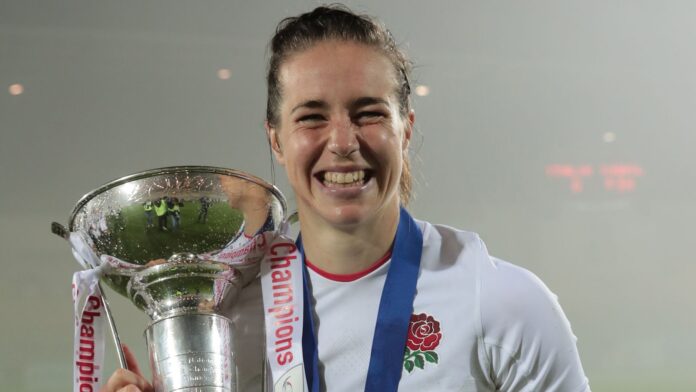 England Women centre Emily Scarratt chats to Sky Sports Rugby on the attention and spotlight she has dealt with as one of the most recognisable figures in women’s rugby, and how she handles it. The 30-year-old also discusses how she has managed pressure throughout her playing career

A 2014 Rugby World Cup winner, 2019’s World Rugby player of the Year, a star on world Sevens circuit and an England legend to boot, there are few more recognisable figures in women’s rugby than England’s Emily Scarratt.

In the 2014 World Cup final against Canada, it was Scarratt who scored the decisive try with six minutes remaining to confirm glory, having also kicked 11 further points in the final.

She was the top point-scorer at the 2014 World Cup, captained Team GB at the Rio Olympics, and won a bronze medal at the 2018 Commonwealth Games.

During the 2020 Six Nations, Scarratt became the highest Red Roses points scorer in history. Even in their most recent Test against France at Twickenham in November, it was Scarratt who kicked the match-winning penalty in dead-time to secure a 25-23 victory.

A life and career in the spotlight. How has Scarratt managed it? Embrace it or shy away from it?

“It’s a bit of a balance I think,” Scarratt said, speaking as this week’s guest on Sky Sports Rugby’s Will Greenwood Podcast.

“I’m not naturally the type of person that wants to be front and centre, just in terms of my personality.

“But at the same time I think I understand the role that we’re all playing at the moment in terms of wanting to build the game, share it to more people, all that sort of stuff.

“And I’m pretty passionate about that. I know what rugby has given me throughout my journey and I’d love to see more people be exposed to that and have the opportunity to do that. I totally understand that and embrace it.

“I guess it’s a weird one, isn’t it? We’ve got loads of people in our team who obviously grab the highlights for many different reasons, and I think that’s the great thing about being in a team sport: you’re generally never left there out by yourself. There’s a lot of people around you.”

Having turned down a US Basketball Scholarship at the age of 16, Scarratt focussed her efforts on the oval ball game, making her Test debut for England in 2008 at the age of 18.

Her entry into the international arena of the sport saw her explode onto the scene with a flurry of scores. Indeed, by 12 caps, she had notched 12 tries.

Ever since, Scarratt has had the pressure to succeed in an England shirt thrust upon her.

“I think I’ve gone through waves over my career with regard to the whole pressure thing,” she says.

“When I first came into the side, I was this youngster, and there was some stat where I’d scored more tries than I’d got caps, and that got blown up.

“You come in as a youngster and it’s all fresh, and there’s kind of no expectation. But then that changes a little bit and all of a sudden, there’s pressure on you.

“People expect certain things, club and country. We go to the World Cup and obviously do really well there in 2014, and that pressure rises again.

“I went away to play Sevens for a little bit, and the pressure was still there but I think I changed my mindset on it a little bit.

“I just kind of enjoy that pressure now, and I don’t think it ever bogged me down but it’s certainly something that had a stage where it was at the forefront of what I was doing rather than actually just doing what I was doing because I loved it and because it’s what I’ve always done and just embracing that challenge.

“And I think that’s where I’m at, at the moment: just embracing the challenge.

“I’m 30-years-old now, so I’m very aware now that I’ve had more years than I’ve got left, and just wanting to enjoy the rugby that I play.

“I know I’ve still got a lot more to give and know I can definitely still be better.

“So it’s a nice pressure to have.”

To listen to all that and much more click here to listen to the latest edition of Will Greenwood’s Podcast.