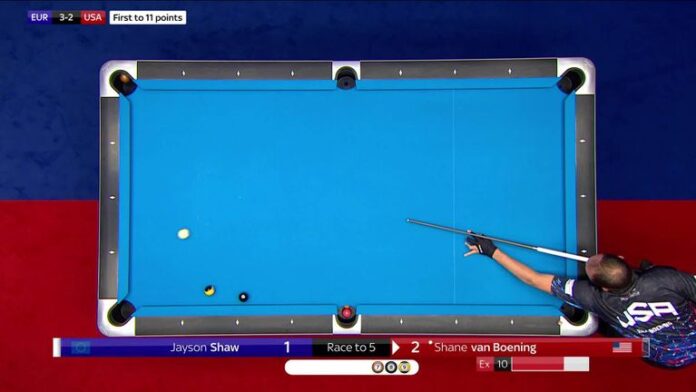 Team Europe light the blue touchpaper at the Mosconi Cup on Wednesday night with Jayson Shaw inspiring his side to complete domination against USA, who have not won the event having trailed the second day since 1997

A blue wave surged through Coventry’s Ricoh Arena on night two of the Mosconi Cup as Team Europe swept aside USA to edge towards their end goal of regaining the trophy for the first time in three years.

Jayson Shaw was the main man, winning all three of his matches to help Europe build an emphatic 8-2 overnight lead in the race to 11.

Captain Alex Lely will now map out his line-up for Thursday with the main aim of completing the job with one night to spare.

“The boys really played well,” Shaw told Sky Sports. “There were a couple of close matches which could have gone either way but fortunately it went our way so delighted to come out 5-0.”

Fans voted in their thousands to see Eagle Eye Shaw and Captain America Shane Van Boening face each other in the opening match of the night.

In a repeat of the 2018 fans’ choice, it was SVB who surged into a 3-1 lead but Scotland’s ace shooter pulled it back level. There was some incredible shot making from two of the very best in the game with their intense rivalry heading to another dramatic conclusion.

Van Boening joined Shaw on the hill but it was the latter who got the job done to strike a big psychological blow to Team USA as his veteran opponent lost the fans’ choice clash for the third year in a row.

There was no rest for Shaw who was back up alongside US Open Champion Joshua Filler against reigning MVP Skyler Woodward and rookie Chris Robinson.

There was nothing to separate the pairings after eight racks as it went to the hill-hill for the second match in a row. It was left to Shaw to seal the deal. He made the perfect break off shot and then potted the all-important 9 ball to help the Europeans move three points clear.

Reigning world champion Fedor Gorst then produced a performance beyond his years to upset the experienced Corey Deuel 5-2 to open Europe’s lead to four points.

Gorst, 20, who was born the year 43-year-old Deuel played in the competition in its very first year, proved just what an exciting talent he is.

Billy Thorpe and SVB looked to stop the rampant European tide with Eklent Kaci and Albin Ouschan standing in their way.

Ouschan rolled in a tricky 7-9 combo to put the European duo 2-1 up and although the Americans were the first to the hill at 4-2, the men in blue battled back to send it to hill-hill. Kaci’s break-off shot then set them on their way to a fine victory.

Shaw was back out for the third time on the night with The Thorpedo looking to stop the rot. The Scot was first to the hill, and although Thorpe pulled it back to 4-3, Europe’s talisman soon completed victory to complete the whitewash.

For those on the move, we will have the 2020 Mosconi Cup covered via our website skysports.com/more-sports, our app for mobile devices, and our Twitter account @skysportspool for latest news and reports from Tuesday, December 1 until Friday, December 4.