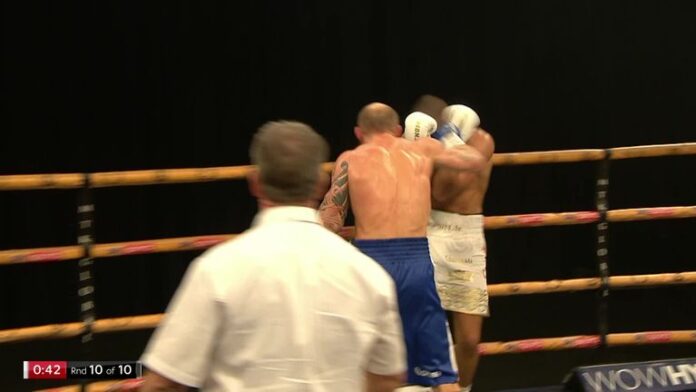 Harlem Eubank shone on the undercard by outpointing Danny Egbunike to extend his unbeaten record to 11-0.

A cagey fight to conclude the featherweight tournament between the two former British champions was edged by the superior sharpness and speed of Liverpool’s Dickens.

His left hand was the most eye-catching punch and repeatedly caught Norfolk’s Walsh who alternated his stance between orthodox and southpaw without avail.

“I’ll have my reward when I get a world title,” Dickens said.

Ricards Bolotniks battered Serge Michel to a 10th-round stoppage in the light-heavyweight final.

Latvia’s Bolotniks forced Germany’s Michel into a brawl and scored two knock-downs en route to a victory that also allowed him to take home the European title.

Michel was wilted in the fourth round and deserved credit for battling so much further because Bolotniks was inflicting a shellacking on him.

In the 10th and final round, Bolotniks hit him with a right hook and when Michel went down a second time, his corner threw in the towel.

Harlem Eubank‘s footwork and speed was enough to defeat Danny Egbunike on points.

The battle of the undefeated British super-lightweight contenders went Eubank’s way when he controlled Egbunike with his jab.

“I tried to keep it clean and work my boxing,” Eubank said.

“Make him miss, make him pay.”

He is now a step closer to challenging for the English title.

Northern Irishmen Fearghus Quinn and James McGivern each extended their records to 2-0 with points wins in six-round bouts, and Adam Azim won his pro debut.