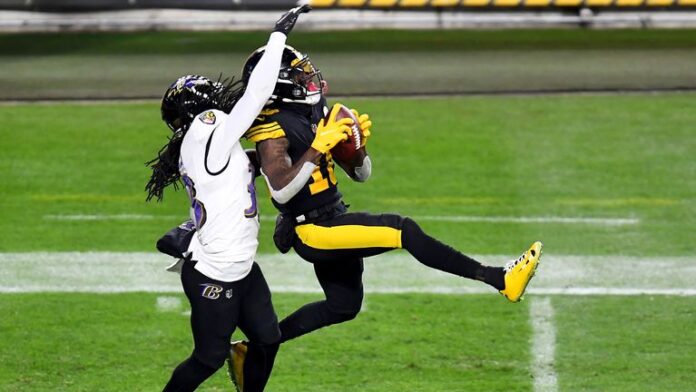 Robert Griffin III, starting in place of Lamar Jackson, completed 7-of-12 passes for just 33 yards, throwing a pick six interception to open the scoring. He’d leave the game in the fourth quarter seemingly struggling with a hamstring injury

The Pittsburgh Steelers kept their unbeaten record intact with an unconvincing 19-14 win over the depleted Baltimore Ravens in their rescheduled game on Wednesday night.

Originally meant to be played on Thanksgiving Thursday, the game was postponed three times because of a coronavirus outbreak at the Baltimore team facility last week. Several players from both sides sat out while on the Reserve/COVID-19 list, most notably reigning league MVP, Baltimore quarterback Lamar Jackson.

Robert Griffin III, starting in place of Jackson, completed 7-of-12 passes for just 33 yards, while he fumbled a hand-off and threw a pick six interception on the Ravens’ first two possessions. He’d leave the game in the fourth quarter after seemingly struggling with a hamstring injury.

Trace McSorley – a sixth-round draft pick in 2019 – completed 2-of-6 pass attempts for 77 yards, including a 70-yard touchdown to Marquise Brown to bring Baltimore back to within five of Pittsburgh in the final three minutes of the fourth quarter. But the Steelers (11-0) then ran out the clock to ensure their unbeaten record remained intact.

Both teams struggled for rhythm, particularly on offense, and the early part of the game was especially sloppy, including four turnovers in the first quarter.

Joe Haden opened the scoring by jumping the route of receiver James Proche to intercept Griffin and returning the ball 14 yards for a touchdown.

Pittsburgh returner Ray-Ray McCloud then muffed a punt, which was recovered by Baltimore’s Anthony Levine. That led to a Gus Edwards goal-line touchdown run to earn the Ravens a 7-6 lead after the Steelers had missed with their extra point effort.

In the second quarter, kicker Chris Boswell made amends with field goals of 25 and 27 yards, giving Pittsburgh a 12-7 half-time lead.

After a scoreless third quarter, the Steelers stretched ahead as JuJu Smith-Schuster scored a one-yard touchdown to cap a 12-play, 61-yard drive.

McSorley’s first career touchdown pass brought the Ravens back to within five 19-14 but it proved too little too late as they dropped to 6-5 on the season with defeat.