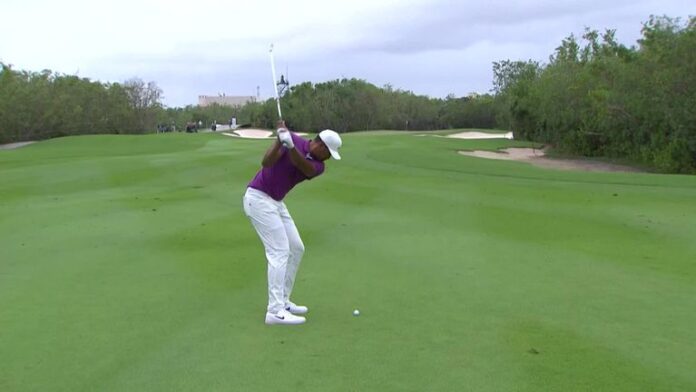 Russell Knox holds a one-shot lead in the final regular PGA Tour event of 2020; Brooks Koepka six off the pace and world No 3 Justin Thomas seven shots back – watch live on Friday from 7pm on Sky Sports Golf.

Russell Knox fired a six-under 65 to hold a one-shot lead after the opening round of the Mayakoba Golf Classic in Mexico.

The world No 221 mixed seven birdies with a lone bogey on a breezy opening day at El Camaleon Golf Club, giving him a narrow advantage over Joaquin Niemann, Emiliano Grillo and Tom Hoge.

Beginning on the back nine, Knox opened with three straight pars before following back-to-back birdies from the 13th by rolling in from three feet after a stunning tee shot at the par-three 15th.

Knox birdied the 17th and added another from six feet at the 18th to reach the turn in 30, with the Scot then bouncing back from a three-putt bogey at the second to make successive gains from the fifth on his way to setting the clubhouse target.

“I know my game and my swing is progressing nicely, my putting is as good as it’s ever been,” Knox said. “I know obviously if you’re going to be there at the end, you’ve got to keep your foot down, keep playing aggressive, free swings and that’s my main goal.”

Grillo birdied four of his last five holes to get within one of the lead and Niemann played a five-hole stretch in five under to jump into tied-second, with Hoge completing the trio on five under after he built on three birdies in his first four holes.

Brendon Todd marked his title defence with a four-under 67, joining Tony Finau and home favourite Carlos Ortiz in the group two off the pace, while Rickie Fowler opened with a one-under 70 despite racking up a quadruple-bogey and double-bogey in his round.

“This has to be the lowest I’ve shot with a quad,” Fowler said. “That doesn’t happen a whole lot. I’m definitely happy with what we were able to do and salvage what could have been a really bad day.”

A penultimate-hole bogey left Brooks Koepka signing for a level-par 71 and world No 3 Justin Thomas – the highest-ranked player in action – started with a one-over 72, with Graeme McDowell and Luke Donald alongside Thomas in a share of 70th.

Watch the Mayakoba Golf Classic throughout the week live on Sky Sports. Live coverage continues on Friday from 7pm on Sky Sports Golf.