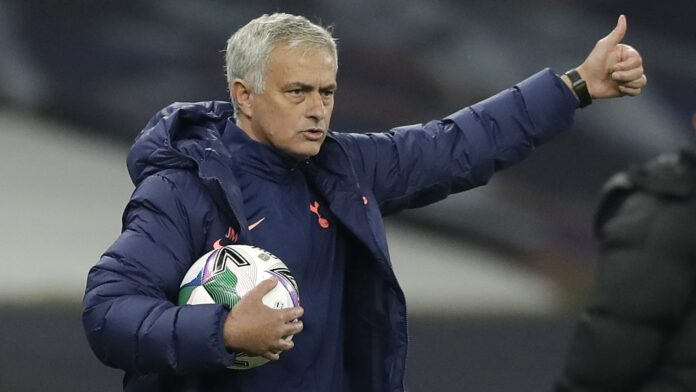 Jose Mourinho has Tottenham playing pragmatically – but the Spurs fans will want their talented team to open up and attack struggling Arsenal on Sunday, Jamie Redknapp has told the Pitch to Post Preview Podcast.

Spurs go into this weekend’s north London derby top of the Premier League table, after backing up a counter-attacking masterclass against Manchester City with a defensive stalemate at Chelsea last weekend.

Mourinho’s side currently have the best defensive record in the Premier League and, speaking on this week’s Pitch to Post Preview Podcast, Redknapp credited the manager for how solid he has made his team and how he convinced his players to buy into the style of play.

“I was at their first game of the season when they played Everton and there were a lot more questions than answers, they didn’t start very well,” said Redknapp. “They looked short of any quality, guile. They pretty much looked an ordinary team that day.

“But Jose has got them working very hard for each other defensively. It’s not pretty, you can’t turn around and say it’s really enjoyable to watch. It’s not expansive football. But it’s a winning type of football right now.

It’s not pretty, you can’t turn around and say it’s really enjoyable to watch. It’s not expansive football. But it’s a winning type of football right now.

“They’re sitting ever so deep, they’re organised. I watched the game against Chelsea, when he was playing Moussa Sissoko and Pierre-Emile Hojbjerg, who has done a really good job, and he said to them ‘defensively, you’ve got real jobs to do’.

“That in itself is an art form because a lot of midfielders now want to play when they’ve got the ball. There aren’t many players that would give up themselves like, say, Moussa Sissoko is right now, and do that job of man-marking people, running back into his own box.

“Jose is getting his players to do a job for them. It’s not exciting it’s not expansive but right now it’s working.”

There will be 2,000 socially-distanced Tottenham fans at the game with 14th-placed Arsenal – however, Redknapp reckons Mourinho would be unable to play in such a conservative style if the stadium was full, given the club’s history of attacking football.

Redknapp also rejected the suggestion from Mourinho that Tottenham were just a “little pony” rather than a horse in the title race and said Spurs in fact have a high-quality line-up.

“They’re certainly not the little pony that he suggests,” said Redknapp. “I know what he’s trying to do because he’s very good at it – they are not the little pony, that squad is full of quality and also depth that you need if you’re going to win a title.

“I know there will be 2,000 fans in there but if it was a full house they’d demand them to go forward, the Spurs fans. They want to see good football, they’ve been used to it over the years, not only that you’re in form and it’s hard to pull the reins when you’re playing well and everything feels great in terms of the football and the way you’re winning matches or getting points.

“You’d like to think they’d have a go but I know the manager. I was sat right by the bench at Chelsea and there was a time where Joe Rodon picked the ball up and had a little dribble through midfield. Gary Neville and Martin Tyler were like, ‘that’s good to see, look how they’re going forward’ and Jose…he was fuming that the defender had vacated that space!

“We give so much credit to Jose but at times, there’s nothing you can do. If Harry Kane and Heung-min Son want to play and have a go, it doesn’t matter what the manager says. Although I’ve been a little bit negative, there were moments in that Man City game on the counter-attack where they were fantastic. I think they will have a go at this Arsenal team because of how they’re struggling themselves.”

On Deadline Day, Redknapp appeared on Sky Sports News alongside Harry Redknapp, and scoffed at his dad’s suggestion Spurs could win the title. Redknapp stands by his scepticism but believes circumstances have played in Mourinho’s favour.

“I laughed at him,” said Redknapp about his dad’s prediction. “At that time there was Virgil van Dijk and Joe Gomez fit for Liverpool and I didn’t see [Spurs] as contenders. I still stand by that – if Liverpool had Van Dijk and Gomez fit for the season, Liverpool I think would win the league.

“But right now, with the way things have gone, I think it plays into [Spurs’] hands a little bit that there’s no crowd there. Because Tottenham fans are used to a type of football, good football. I remember going there with Mauricio Pochettino and it was exciting and that’s what the crowd want, but because there’s no crowd there it enables Jose to play the way he is and to sit back and get men behind the ball.

That team is extremely dangerous as long as those two – Kane and Son – are fit and able to play.

“I don’t think a lot of Tottenham fans would enjoy that type of football, although right now they just want to win. They will demand the team goes forward and presses and plays exciting football. This team right now isn’t but it’s winning. I’m not trying to undermine what they’re doing but it’s pragmatic to say the least.

“If they were to lose one of Kane or Son it would be incredibly difficult for them to win the title. But if they maintain their fitness and Kane keeps the form up, that team is extremely dangerous as long as those two are fit and able to play.

“Otherwise, playing that way without having those two would become incredibly difficult. They’re the icing on the cake.”

Pitch to Post Preview: Redknapp assesses Tottenham and Arsenal; Plus the return of fans, Chelsea’s striker dilemma, and more!

This week on the Pitch to Post Preview Podcast, Jamie Redknapp joins Peter Smith and Adam Bate to look ahead to the north London derby and assess Tottenham and Arsenal’s contrasting form.

Sky Sports News reporter Rob Dorsett also has the latest from Leicester and the future of Jonny Evans, while we discuss whether Olivier Giroud should be Chelsea’s first-choice striker and Man Utd’s tricky trip to West Ham.

Plus we hear from a Charlton supporter about the experience of returning to watch live football. Adam also makes his bold Pitch for what he thinks will happen in this weekend’s Premier League action – and it’s good news for the teams in the relegation zone…