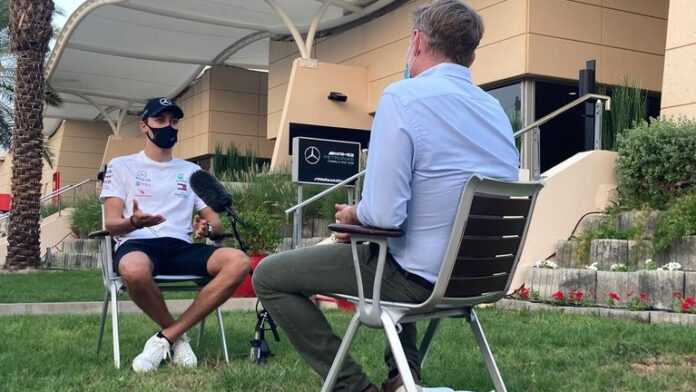 Watch and read the Sky Sports F1 interview with Mercedes’ Lewis Hamilton stand-in below as George Russell speaks about his expectations for his first weekend at F1’s sharp end with the world champions; See Russell’s first drive in 2020’s title-winning car from 1.30pm on Friday on Sky F1

George Russell believes he has the “hardest shoes ever to fill” by standing in for Lewis Hamilton in the world championship-winning Mercedes at the Sakhir GP.

The 22-year-old Briton, who has only previously raced for Williams towards the back of the field in the sport and is yet to score an F1 point, has vowed to take a “step by step” approach over the race weekend to building up his confidence and understanding of the W11 – which he will drive for the very first time in practice in Bahrain on Friday, which begins at 1.30pm live on Sky Sports F1.

Hamilton, sidelined for the first GP of his career after testing positive for Covid-19 on Monday, has won 11 of this season’s 15 races and claimed a record-equalling seventh world title at a canter last month.

And while Russell is therefore stepping into the car that has dominated F1 2020, he is under no illusions about the challenge he faces.

Speaking in an exclusive interview with Sky Sports F1, Russell told Simon Lazenby: “Lewis is the greatest of all time statistically. In my opinion, as well, I believe he is the most all-rounded best driver ever, I think.

“For me having seen him up close as well, seeing how he drives, how he interacts with the team and everything.

“So stepping into his shoes, into his car that he won the world championship in is obviously surreal. It’s the hardest shoes ever to fill.

“Coming in in the penultimate race of the season, it’s tricky. It is very tricky.”

Managed by Mercedes, Russell described the Brackley team as “like my second family” having spent 2018 as their reserve driver and testing for them in each of the previous three years.

But his most recent test in one of their cars was last December and so this year’s W11 – a challenger built and optimised around Hamilton and Valtteri Bottas, who are both shorter than Russell – is completely new for him.

Formula 1 is taking a big step into the unknown this weekend at the super-fast Sakhir GP – click the link to find out the full schedule on Sky Sports F1.

“It’s a strange position to find myself in,” admitted the King’s Lynn-born driver, who revealed on Thursday he is having to wear a smaller race boot size for this weekend to help squeeze into the car.

“Obviously I need to wait and see how I get on because, for example, if I were to have another driver come into the Williams car mid-way through the season I’ve been in that car for a year and a half, I know the team, I know the set-up.

“I will be comfortable and confident and those guys would struggle to come in being my team-mate because I’ve had that chance to understand everything in a Williams car.

“Obviously Valtteri’s been at Mercedes now for four or five years, I’m not expecting to come in and be right on the pace straight away. It’s a new seat, different car, different thing to learn and it will take a bit of time to get used to everything. But I expect to be a bit quicker than what I was previously and hopefully fighting at the top end of the grid.”

Russell added: “It’s trying to unlearn what I know and relearn new things, in the space of two days. It’s a tall order.”

Outlining his approach to the weekend, he explained: “It’s just taking it step by step. Friday, learning as much as I can.

“It’s going to be different. Normally Friday is all about preparing for Saturday but this Friday it’s all about learning everything ready for Saturday, ready for Sunday. Getting a view how I’m getting on against Valtteri, try and learn from him, and see where I am.”

What do Russell – and Mercedes – expect from him?

Despite his unfamiliarity with the car he will be driving for the next three days, Russell is being widely tipped to perform strongly having impressed in his two seasons at Williams with uncompetitive machinery.

Never outqualified by a team-mate in 36 races, the former F2 champion is already considered a leading contender for a full-time Mercedes seat from 2022. This weekend’s outing is therefore being viewed by many as a chance for him to stake an early claim against an established yardstick in Bottas.

But Russell insists he goes into his debut for the team carrying “no expectations” from either himself or the world champions’ management.

“There’s a lot of expectation from a number of people, media, fans, what have you, but [I am] blocking that out,” he insisted. “I’m just going to do my own thing, build up to it, go out there in FP1, don’t try to set the world on fire and just prepare and get ready for qualifying. For me, Sunday is the main thing. Focusing for the race.”

Four years ago and Max Verstappen, then with little more than one season of F1 behind him, stunned the sport by winning on his first appearance for Red Bull at the 2016 Spanish GP, on the same weekend he first drove their car.

Could Russell conceivably do the same with the grid’s quickest machine?

Asked if he believed in his heart of hearts a win was possible, he replied: “You’ve obviously got to believe.

“I’ve been given an incredible opportunity but, like I say, I’m not setting any targets. I’m just going to give it my all, as I’ve done always. Go out there, drive as quick as I can come Saturday afternoon, Sunday afternoon and what happens, happens.”