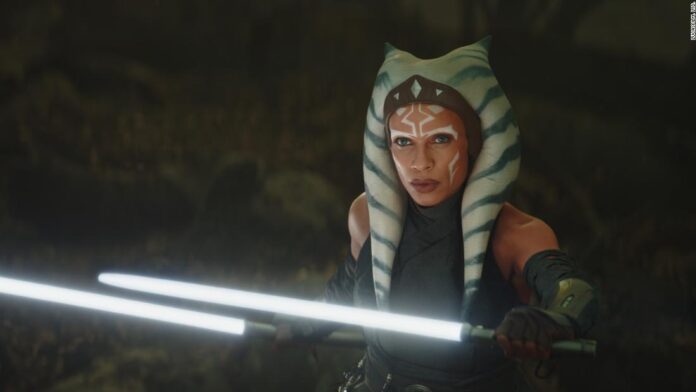 Having already teased his return in the season premiere, Temuera Morrison formalized his role as the bounty hunter Boba Fett — the original wearer of that iconic armor — in an action-packed episode that premiered Dec. 4.
That comes amid a season that has already seen the Disney+ series circle back to the animated series “Star Wars: The Clone Wars” and “Star Wars Rebels,” reflecting savvy use of existing mythology as the show builds upon its own.
During the decade between the second and third “Star Wars” trilogies — the gap from “Revenge of the Sith” to “The Force Awakens” — animated TV shows carried the banner for Lucasfilm. With the movies again at a crossroads, the new live-action standard-bearer has exhibited an uncanny knack for tapping into the fan base’s passions.
As the previous episode underscored, animation has long been an unsung hero of the “Star Wars” franchise, both in terms of keeping the brand alive and planting seeds to help cultivate its present and future.
With the latest chapter, the show reached even deeper into “Star Wars” lore, offering the kind of dazzling action sequence involving Boba Fett that frankly eclipses anything the character (or his father, Jango) did in the previous movies.
One key ingredient in “The Mandalorian’s” evolution would be Dave Filoni, who executive produced the animated series and has joined Jon Favreau in shepherding along this first live-action TV show.
Filoni, notably, wrote and directed the episode titled “The Jedi,” which brought one of the most popular “Clone Wars” characters, Ahsoka Tano, into the live-action realm, played by Rosario Dawson.
Ahsoka’s appearance — which prompted another rapturous wrinkle in the Force — is one of several ties to the animated shows.
In addition to Ahsoka — who had served as Anakin Skywalker’s padawan before his fall to the dark side — the new season introduced Katee Sackhoff as Bo-Katan Kryze, reprising a Mandalorian warrior she voiced on those animated programs. Ahsoka also referenced seeking Grand Admiral Thrawn, a blue-faced bad guy from “Rebels.”
All this might sound arcane to those who never tuned into the series, which primarily played on children’s cable networks. “Clone Wars” premiered in 2008 on Cartoon Network, later playing on Netflix, and recently finishing its run on Disney+. “Rebels,” set five years before the original “A New Hope,” aired on Disney XD, an adjunct of Disney Channel.
The live-action series has nevertheless highlighted how those smaller platforms can and have been used to sustain the “Star Wars” brand.
With Ahsoka’s debut, and now Boba Fett, the notion of seeing such figures crop up elsewhere — including live-action TV and even movies — seems especially ripe with possibilities, with wide gaps that could be filled in those timelines.
Nor, it should be noted, has the commitment to animation ceased, with a “Clone Wars” spinoff, “Star Wars: The Bad Batch,” scheduled to hit Disney+ next year.
Since Disney acquired Lucasfilm in 2012, the studio has made clear that the “Star Wars” galaxy is vast enough to explore across a variety of fronts. But when the prequel “Solo: A Star Wars Story” yielded disappointing box-office results, Lucasfilm dialed back its theatrical ambitions.
What “The Mandalorian” has demonstrated — by plunging into “Clone Wars” and “Rebels,” and now the original trilogy — is that the appetite for more “Star Wars” is out there. And if the goal is keep stoking those embers, this is, indeed, the way.