Home Sport Russell: As good as it looks for Hamilton’s stand-in? 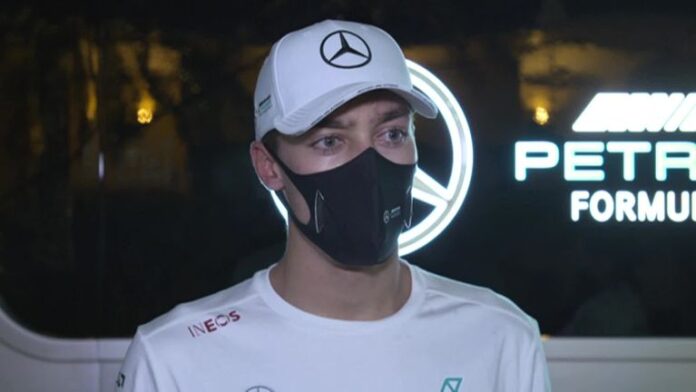 “Just because I was quickest today it doesn’t mean that’s where I’m going to be tomorrow,” stresses George Russell after commendable opening practice day in Mercedes’ car in Bahrain; Watch final practice at 2pm and Qualifying at 5pm live on Sky Sports F1 on Saturday

George Russell took the plaudits of the Formula 1 paddock amid a skilled, timesheet-topping debut for Mercedes which has raised tantalising questions and prospects for Lewis Hamilton’s stand-in at the Sakhir GP, starting with qualifying on Saturday.

But Russell himself was keen to strike a note of caution at the end of a Friday which saw him top both practice sessions on his first day at the wheel of Mercedes’ title-winning 2020 car.

“Just because I was quickest today it doesn’t mean that’s where I’m going to be tomorrow,” he warned.

In many senses the 22-year-old is right; Valtteri Bottas and not Hamilton has frequently been the Mercedes driver to set the pace on Fridays in F1 this year yet it is the Briton who has dominated the championship.

F1’s teams run different set-ups and car settings during free practice as they work on different aspects of the race weekend, while drivers explore the limits of the track. That often makes Friday’s times in particular misleading.

Bottas posted a lap time which was quicker than Russell’s in Practice Two but it was deleted for a track limits transgression, leaving the Finn an unrepresentative 11th fastest.

Yet the fact Russell was quickly on the leading pace relative to the experienced Finn in a car he was not familiar with, and a team he has never driven for on a race weekend, was unequivocally impressive.

“He has done what this paddock thought he would do,” said Sky F1’s Paul Di Resta, underlining the high esteem the Briton is held in following two eye-catching seasons near the back of the field at Williams.

Russell’s performance also drew praise from Red Bull boss Christian Horner: “Valtteri is a constant, he’s normally pretty racy on a Friday. He obviously had a couple of times disallowed but George has done a very solid job.

“That’s impressive to top both sessions.”

The Sakhir GP continues live on Sky Sports F1 on Saturday with Practice Three from 2pm ahead of Qualifying at 5pm, with build-up from 4pm.

Russell’s verdict on his W11 debut – and weekend prospects

Russell completed 97 laps around Bahrain’s short but fast Outer loop, which is being raced on in F1 for the first time and is set to produce the fastest lap in terms of duration in history on Saturday.

“I found it good, to be honest,” explained the King’s Lynn-born ace, who has been a Mercedes-managed driver since 2017 but only hitherto raced for Williams in F1 and is yet to score a point in 36 starts.

Track is fast. Car is no slouch either. pic.twitter.com/l3h3B1vCXa

“I’m working with the best in the business and I’m learning so much, every single lap I’m in the car.

“I do think the lap times are a little bit deceiving at the moment and aren’t a true representation of the pace.”

He noted his pace on the longer fuel-laden runs as driver practised for Sunday’s race – Bottas appeared to have an edge on both the soft and hard compound, while Red Bull looked quicker than both – and said his team-mate was effectively faster on the qualifying simulations.

“FP2 was not a great session for me,” he said. “I struggled – especially on the high fuel – and ultimately that’s going to be key on Sunday. Still got a lot of work to do to get comfortable in the car.”

Russell added: “Verstappen was incredibly quick in the long runs. Valtteri was quickest in P2 but got his lap deleted – he was probably only gained half a tenth in all honesty. So I’m probably a good tenth and a half behind Valtteri in the low fuel.”