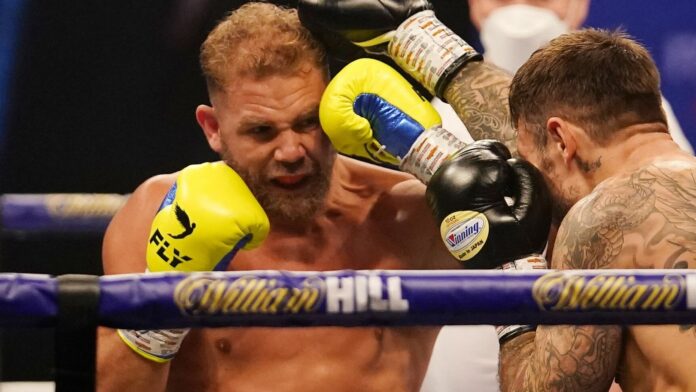 Billy Joe Saunders completed a masterful points win over Martin Murray to retain his WBO super-middleweight title and stay on course for a big-name fight in 2021.

The unbeaten 31-year-old dominated from the opening round with his superior ring skills as Murray fell short in his fifth world title attempt, suffering a unanimous decision loss with scores of 120-109, 120-109 and 118-110 at The SSE Arena, Wembley.

Saunders came agonisingly close to a May meeting with Saul ‘Canelo’ Alvarez, who will instead fight fellow Brit Callum Smith later this month, but the Hatfield man remains in contention to face the winner after a classy victory.

Taking the centre of the ring, Saunders searched for early openings with his probing jab and followed up with stiff left hands in the first round.

Murray was covering up behind a high guard, but Saunders prised it apart with a fierce flurry in the second, while the swaggering champion unloaded a jolting uppercut in the third.

Saunders attacked with ferocity in the fourth, sending Murray toppling to the canvas, but referee Phil Edwards harshly ruled out a knockdown.

Murray desperately tried to put a dent in the elusive Saunders as he missed wildly in the fifth, although he did manage to dig in body shots during a scrappy sixth round.

Blood dripped from Murray’s nose in the seventh following more crisp counters from Saunders, who received stern words from Edwards after a low blow in the eighth.

Murray, fired up by the stray punches, tried to land a telling blow in the ninth, but Saunders saw him coming, replying with sharp shots and he ripped in another uppercut during the 10th.

Only Murray’s toughness was denying a stoppage for Saunders, who completed a wide victory on the scorecards in the closing rounds.